We shouldn’t confuse just thinking with good thinking. Practically every situation we encounter requires thinking before acting. But commonly, your usual cognitive methods won’t cut it. You’ll need a fresh perspective. A new way to look at things to solve a complex problem. That’s where thinking in 3D – or three-dimensional thinking – can help.

The scientific word for 3D thinking is spatial visualization.

Spatial visualization is the ability to rotate, maneuver, and disassemble two and three-dimensional objects in your head. You interact with objects with your working memory to see how they look from all sides and potentially figure out how they were assembled.

Strong 3D thinkers can even invent whole structures in their heads before even picking up a drawing tool to start the initial blueprint.

Commonly, people who are dyslexic are considered strong 3D thinkers.

One example is James Russell. The person who invented the compact disk in 1973 – or at least the first operating prototype was produced then.

In an interview, he shares that a large part of the design was invented in his head before he even touched a pencil.

All that sounds great.

But you might ask: “How we can leverage thinking in 3D in our daily lives besides faster-constructing Legos?” And, potentially, “Why do we need to use this thinking type?”

That’s what we’re going to look at in this post.

What is 3D Thinking?

More specifically, what is 3D thinking in relation to problem solving?

Three-dimensional thinking in relation to solving everyday problems can be considered your ability to observe situations from all sides. Disassemble them, so you can find the core issue and then find a creative solution outside the current domain.

The tenants of a large office building were complaining about the slowness of the elevator. It took several minutes to go from the ground floor to the top. Senior people were wasting time (and money).1

A consulting firm was hired that provided the cost for improving the current elevator and potentially adding a new, faster elevator. However, the cost was too high. Then, a young psychologist who was working in the building’s personnel suggested something else – to put mirrors in the elevators. This way, the people waiting will look at themselves. When the mirrors were installed, the complaints magically stopped. In fact, some tenants commented that they were quite satisfied with the improvements in the speed – which were actually zero.

In this example, the problem wasn’t solved with a solution on the X and Y axis – if we consider X to be the speed of the current elevator and Y to be adding an extra elevator. It was solved by Z – changing the perspective of the users of the elevator.

The ride with the elevator was still slow, but it was no longer intolerably boring. The mirror gave people something to do. A chance to look at the most precious thing in the world for them – themselves.

Why is 3D Thinking Important?

3D Thinking is important in real life because certain problems can’t be solved in the two-dimensional world.

Think about your own work. Do the problems you face on a daily basis have a clear set of rules? A clear structure that you can approach with a standard toolbox?

No. The rules are mystifying. The best solution, if it exists at all, can be found only after periods of deep thinking, reflection, and trial and error.

Plainly, the solutions to most of our issues are surprisingly not obvious.

To showcase why three-dimensional thinking is important, let’s look at this great example that I previously shared in my article on critical thinking strategies.2

We’re going to solve a puzzle – a Greek Cross puzzle. Here’s the setting:

You take ten coins and you arrange them to match the following illustration:

The objective is to move just two coins so you can form two rows, containing six coins each when added up either horizontally or vertically.

Your final result should look like this (the solution to the puzzle):

On top of the center coin, you place a second coin. And this second coin is on the Z axis.

Few people can figure out the solution because we’re constrained by our own minds. We think that we can only “play” with the X or the Y axis.

What Is The Difference Between 2D and 3D thinking?

For instance, wind on its own is just air in your face. It can feel good, bad, and it can even destroy your house.

But wind, seen from a different perspective, can help you run faster, sail, and even produce energy.

In essence, 3D thinking is not looking at things independently – in a void. But actively digging. Searching for all of their characteristics and how different objects can connect to each other.

What Is An Example of 3D thinking?

How can 3D thinking help you with your everyday challenges?

To answer it, let’s look at several examples:

3D Thinking In The Workplace

If you’re a business owner and you want to motivate your people to perform better. The usual routes will be to a) offer additional rewards in some sort of bonus scheme; b) you threaten people that you will fire them.

And while the two probably work in some cases. Scientists argue that tasks that require rudimentary cognitive skills are better performed when people are intrinsically motivated – doing something that matters.3

Since a large part of our daily lives is related to consuming content. (Hey, you’re doing this right now.) It’s important to think about our incentives in relation to the content and why are we watching/reading something.

Usually, we look at the surface of the information:

But another way to look at info is by asking yourself the following extra questions:

Let’s take a regular YouTube channel as an example.

Not only that is great to think about how the video was created – especially if you want to start your own channel. But it also leads you to the other question: What are the incentives of the creator?

Sure, he wants to share his experience, a tutorial, etc. But commonly, people creating content are doing it to gain more subscribers, money, fame. So, thinking about their reasons can help you realize that you shouldn’t believe everything they are sharing and that you probably shouldn’t click on that bell icon – to get notified when there is a new video.

As long as factories continue to produce all kinds of sugary things. As long as companies funnel billions of dollars into marketing these sugary things like finger-licking good food. We need habits.

List of good habits in relation to how we eat, exercise, and in all sorts of other categories.

Of course, dozens of online gurus only wait for you to type the word “how to build lasting habits”, so they can attack you with their “simple” 3-step process or something.

But if we apply 3D thinking, we can see that having good habits is not only about reading about habits and exercising when you are feeling motivated.

To build lasting habits, you need a plan on how to practice the habits even when you are not motivated and when things don’t go as planned.

How Do You Start Thinking In 3D?

The solutions to a lot of our problems are not ahead of us. They are not even around us – hiding somewhere in the periphery of our minds. They are deeply buried in our unconsciousness or can be discovered in a completely different field.

To become a 3D thinker, not only that you should think outside the current box. But you have to add more boxes.

What I mean by that, is that after you state your challenge, it’s best to look for solutions from a parallel or a distant field.

The greater the distance from your current field, the greater your chance of producing new and original ideas. Meaning that if you sell computers and you want to increase your sales, a better idea will be not to look at how other businesses that sell computers operate. But look at companies that are doing something totally different.

What Einstein famously did which led him to the theory of relativity is to imagine himself pursuing a beam of light.

He said, “If we could travel next to a light wave, what would we see?”

His answer was, “I should observe such a beam of light as an electromagnetic field at rest though spatially oscillating.”4

Or plainly, he did a thought experiment.

He positioned himself in the middle of the problem and started thinking about what could happen.

The point is to remove the blinders holding you back so you can accept a different perspective.

If we return to the business owners selling computers, we might try to think like a computer.

For instance, “If I’m a computer, what would my concerns be? What would I feel? How would I advertise my features?”

Probably Steve Jobs asked himself such questions which led him to create the Macintosh.

A fun-looking one with inviting colors? Much better.

What Apple did is to showcase computers in a totally different light. Colorful. Fun. Exciting. Giving you the ability to become an artist – not a boring accountant. Moreover, the iconic 1984 Super Bowl ad showcased their product as liberating. Saving people from the nefarious Big Brother (IBM at the time).

Even though it’s hard to define a concrete path toward thinking in 3D. If I am to create one. It will look like this:

How do you start thinking in 3D:

Money. More stuff. More people. These are not the only ways to solve a problem.

Instead of looking to buy more things when there is an issue – or invite more people into a meeting. Optimize for gathering insights.

The more ideas you collect in your head (and in a notebook – if you’re a note-taker). The more thinking tools you’ll have at your disposal.

Nobody’s going to do your thinking for you. You have to do it yourself, whether you’re rich or poor. And you have to do a good job if you want to fix situations and progress.

3D thinking is a great way to escape the rut of linear thinking (common thinking). An awesome thinking tool that you can place in your mental arsenal, allowing you to imagine solutions and find outcomes in your head before even moving a muscle.

Add to your mental toolset by reading the following: 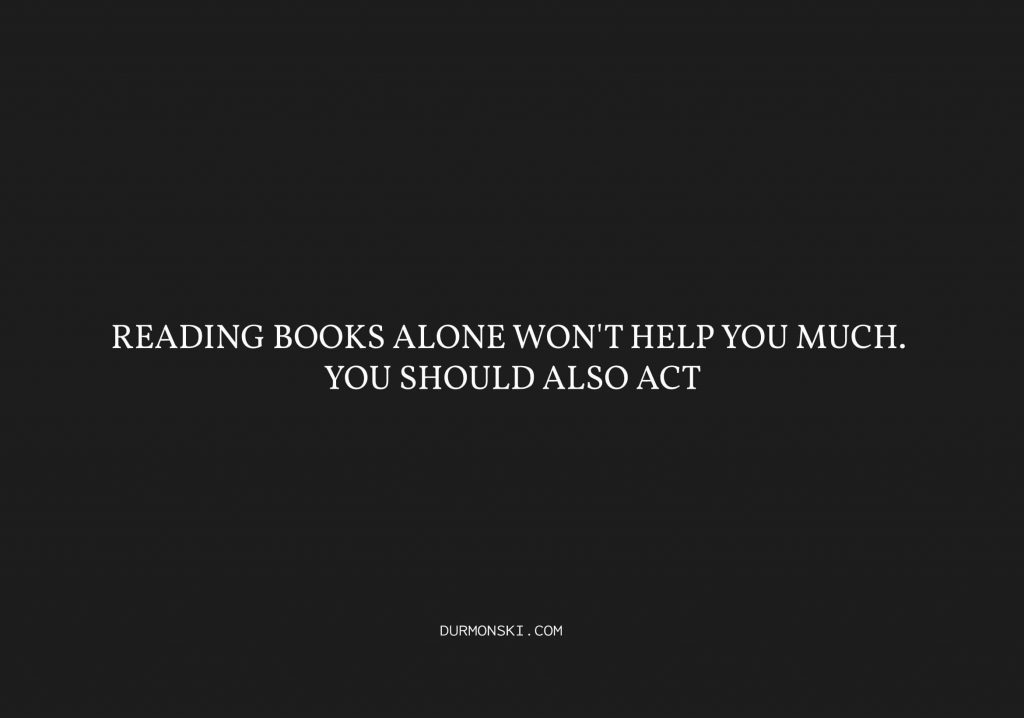 Reading Books Alone Won’t Help You Much. You Should Also Act 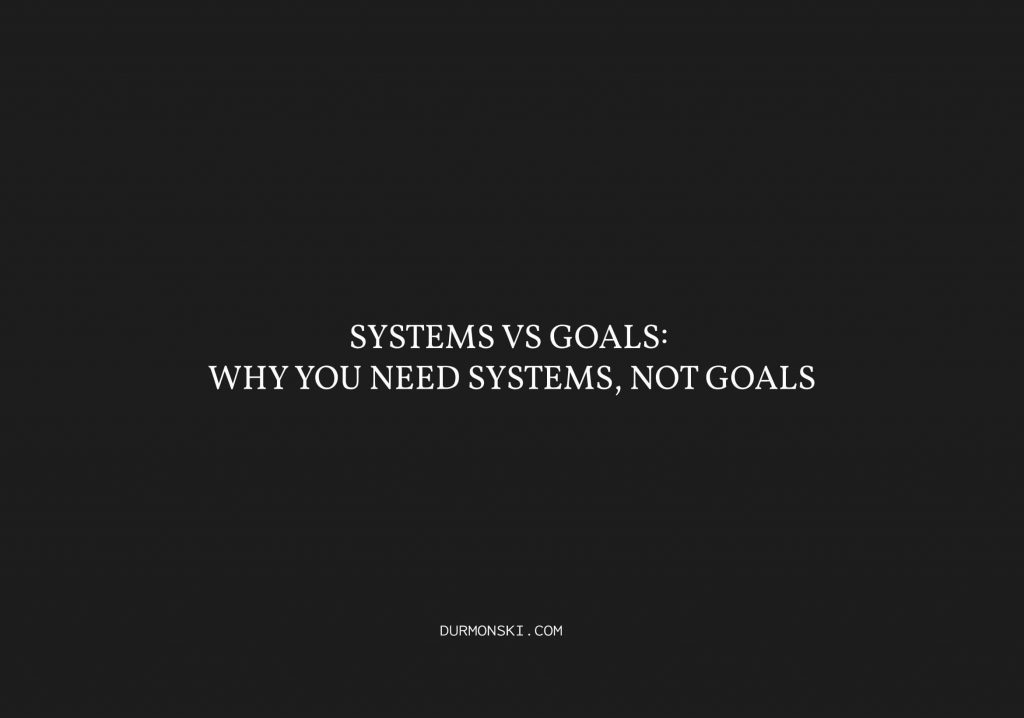 Systems vs Goals: Why You Need Systems, Not Goals