Remember Kodak? The company that previously dominated the camera market, actually invented digital photography, all related components associated with taking photos and interacting with pictures. Or Nokia? The pre-smartphone world leader that was dictating the rules in mobile manufacturing. Unlikely, if you’re a teenager. But many of us can recall these companies and to be honest, I never thought that I’ll buy a phone different than Nokia in my 20’s. But these days you’ll be considered old-fashioned if you pull out a Nokia out of your pocket.

What led these two giants to bankruptcy and near-extinction like state?

But we’re not going to discuss market share, board meeting failures, or how the above two companies gravely misunderstood the ways consumers wanted to interact with the products they were manufacturing. And though I don’t really know what happened, I’m quite positive that their collapse is due to their long line of bad decisions.1

What we’re going to talk about is the decision-making process on a more personal level. Because no matter what you do – whether you run a company or you’re simply trying to be more productive – the decisions you daily make are the ones determining your future.

Think of your daily decisions as piles. And no, I don’t mean like a pile of sh*t – though it might look like this. Rather, as a compilation of your choices.

Pile #1 is the sum total of all your good decisions. The reason you’re healthy. Have a good job. Have some sort of a morning routine. Your apartment is clean and well-arranged. You don’t have anything on your desktop. You basically praise Pile #1 every time you take off your shirt in front of girls.

You might think that you’re ripped and athletic because you’re gifted or because you’re simply born with this physic but it’s actually thanks to your ability to make Pile #1 grow.

It works like this: Every time you’re facing a dilemma-like situation, in the majority of the cases, you make decisions that reinforce your future self. Instead of trying to satisfy your short-term cravings – check social media because you’re bored – your decisions are based on a long-term strategy.

Let me give you a couple of examples:

Or in other words, your actions are nondestructive, healthy, productive, and can literally help make the world a better place.

The bigger the pile of good decisions gets day after day, the healthier you’ll become. Your relationships will thrive and your productivity will skyrocket. You’ll be like a role model for other people to look up to and probably you’ll be even mentioned in the local newspaper for your achievements. Your mom is so proud of you!

But whenever there is light there is also darkness…

While the first pile can help you become the next Mr. Olympia, Pile #2 will do the opposite.

This is a wretched place. Full of short-term gains but long-term losses. Pile #2 is the accumulation of your bad decisions taken over time that will lead, at some point, to a place that’s not social media worthy. Yes, it’s so bad and unappealing. Even all the Instagram filters combined won’t fix the situation and attract new followers.

And while you might think that no self-respecting man, or women, will allow something so bad to happen to him/her, you probably don’t quite understand how this is presented to us.

Though bad decisions are bad, they don’t carry a label bad in the general sense, they don’t actually look diabolical initially. They hide their flaws behind temporary gains. That’s why so many people are confused and actually end up accumulating this large pile of bad decisions walking alongside them that at some point, is the reason their life is destroyed.

Let me explain how this works in details by mentioning a couple of examples:

Eventually, things begin to fall apart. At some point, the following also happens:

Put another way, your mom is not happy. She is actually furious and thinking of unfriending you on Facebook.

Dang! That last one has to hurt.

And that last one happens when Pile #2 is bigger than Pile #1.

When Your Bad Decisions Outweigh Your Good Ones

In the era of Netflix as a downtime habit humans cannot live without. Social media platforms designed to keep you inside even while you sleep. And complex AI that is trying to shove ads in your face that are supposed to trigger ON your buying mode, it’s kind of hard to gather a big sexy pile of good decisions.

To our disappointment, we kind of look like that:

You keep making some good decisions – like going to work and occasionally calling our parents – but the majority of your choices are leading us towards sure disaster, like a not properly tunned self-driving car.

In contrast, making bad decisions always first seem like this fun and exciting thing, while in reality, it’s sneaky and demonic. You end up playing video games for weeks and become careless about your health and relationships with others.

But, my friend, there is a way out of this spectacular tragedy I’m so desperately trying to project. The way to get your good-choice pile bigger and heavier can be explained easily with the concept of marginal gains.

The Power of Marginal Gains

I first came across this term in James Clear’s blog a couple of years ago. He also dedicated a full chapter about marginal gains in his book, Atomic Habits.

In short, marginal gains is all about making small incremental improvements in all your daily processes. The small improvements will first seem insignificant but over time, when they are all added together, they’ll lead to a massive success – imagine that big pile of good choices mentioned above getting bigger.

The story James describes in his book is about Dave Brailsford – the new performance director for the British Cycling team in 2003.

Before joining the crew, the cycling team was a wreck. They haven’t won a medal for years and all seemed lost. The competition was fierce while the moral in the crew was at the bottom. Until, of course, Dave Brailsford presented his strategy for making marginal improvements.

His arguments was that if the riders, and the whole team, can improve each element associated with riding a bicycle by 1%, they would achieve a significant advantage and see a positive rise in the overall performance.

And by each element, he meant every god damn element.

He modernized the team bus to improve comfort and recuperation. The seats were redesigned to be more comfortable. They rubbed alcohol on the tires for a better grip. The outfits of the raiders were custom-made and carefully tailored for better aerodynamics and also to be lighter. The team hired a surgeon to teach the athletes about proper hand-washing in order to avoid illnesses during the competition – they also decided not to shake any hands during the Olympics.2

Or as Dave Brailsford famously said, “The whole principle came from the idea that if you broke down everything you could think of that goes into riding a bike, and then improve it by 1 percent, you will get a significant increase when you put them all together.”3

Thanks to these small improvements the team won 7 out of 10 gold medals. Also, they matched the achievement at the London Olympics four years later. Also, they won three of the last four Tour de France events.

Not bad for what was first a seemingly sinking ship, right?

The Only Thing You Control Are You Daily Decisions

But how we can apply all of this in our daily lives? Because it sounds super confusing: marginal gains, piles of decisions, custom-fabricated suits for better traction. Do we need all of this?

If you’re running a company or you’re managing a bunch of people and you’re trying to increase their overall performance, you should consider doing a lot of things in a lot of different areas. So here’s the YES part. For your personal life and if you’re trying to make your small business operating, you need to focus on one simple thing: make sure you’re constantly aware of your daily decisions.

You might think that achieving your dreams, becoming a world-class athlete, or a world-famous actor, has something to do with possessing some magical skill, fairytale talent or with your inherent skill-set.

The only thing standing between you and your future goal is the way you approach problems and make decisions along the way.

If we make marginal improvements in our daily lives we’ll quickly 10X our results and accelerate our growth.

By focusing all of your efforts on things you can control. These are? The tiny little decisions you need to make daily and also by making sure that they align with your long-term goal.

If you focus all of your time and energy on improving your pitching, you’ll increase the probability in favor of your team for achieving victory. Nothing more, nothing less. Just work on your pitch.

Actually, that was the philosophy of the famous baseball player Tom Seaver. He retired in 1987 at the age of forty-two with these astonishing results: 311 wins; 3,640 strikeouts; 61 shutouts; and a 2.86 earned run average.

During his twenty-year professional baseball career, his sole goal was to pitch, “the best I possibly can day after day, year after year.” He actually extended on that by saying:

Pitching . . . determines what I eat, when I go to bed, what I do when I’m awake. It determines how I spend my life when I’m not pitching. If it means I have to come to Florida and can’t get tanned because I might get a burn that would keep me from throwing for a few days, then I never go shirtless in the sun. . . . If it means I have to remind myself to pet dogs with my left hand or throw logs on the fire with my left hand, then I do that, too. If it means in the winter I eat cottage cheese instead of chocolate chip cookies in order to keep my weight down, then I eat cottage cheese.” Tom Seaver

So what should happen next?

At first, your good decisions will be small and almost unnoticeable compared to the grand scheme of things. But as time goes by and you start to improve in all areas with just a little bit, the weight of your good decision will (1) have a bigger impact and (2) your overall results will improve.

A lot of people, and companies, set these big ambitious goals.

They dream about fame and fortune but they often fail to clearly articulate their future goals or to organize their daily actions. This type of daydreaming is called “positive fantasizing.”4 When individuals have a vision of going somewhere but they can’t figure out how to get there, or never actually think about this, they are just boosting – trying to make themselves seem better or cooler.

Or as said above, make sure that you’re making good daily decisions that are aligned with your long-term goals and are actually improving just a little bit every day. That’s the only way you can get where you want to be. Yes, it will take time, but that’s the only way you can achieve whatever you want to achieve. Everything else, it’s just a fantasy. What You Want To Consume Shapes Who You Become Developing Self-Discipline In The Age Of Distraction 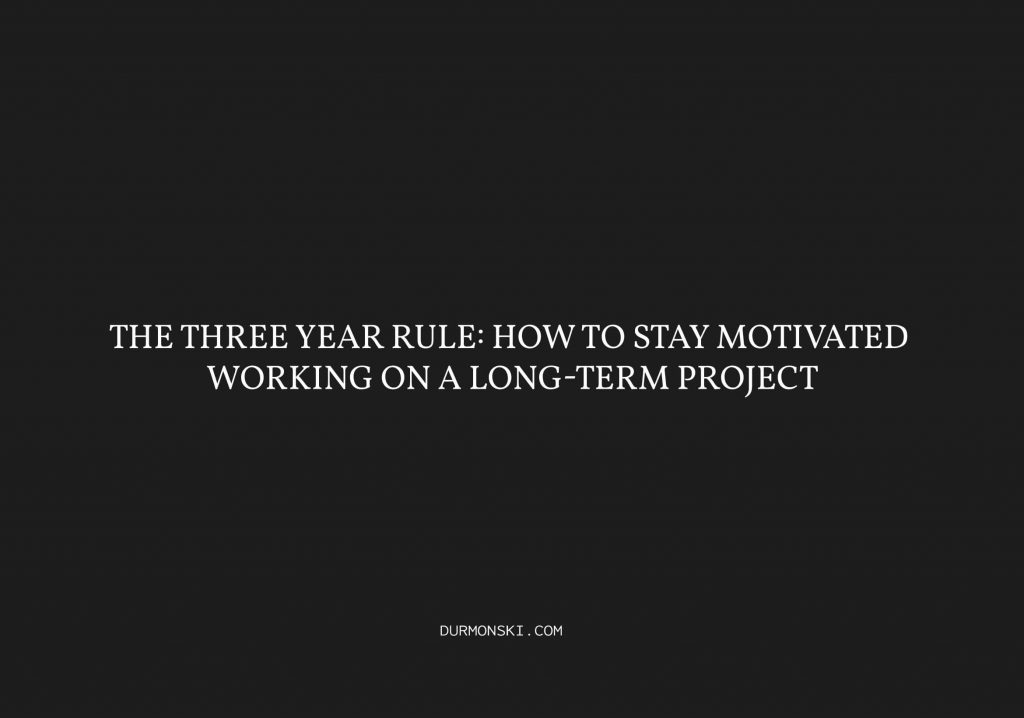 The Three Year Rule: How To Stay Motivated Working On A Long-Term Project