I want to ask you a question: What happens when you try to complete a couple of tasks at the same time, i.e. multitask? And to give you some visual, imagine you’re trying to eat a hotdog while you’re standing at a urinal, trying to do, well, you know. Do you think you’ll be able to chew while you’re doing your biz or you’ll walk out of the public bathroom with a stain? According to recent scientific bathroom studies, 9 out of 10 men will have to shower if they decide to eat something while taking a piss.

At first, multitasking may sound like a good idea. After all, if we can do two things at the same time, we can get more done. Also, two tasks done simultaneously would only take half the time and eventually you’ll have, finally, time to play video games and do other fun things.

Even though pure logic, theory, and all math equations known to men clearly show that in order for someone to create more things and become more productive he should visit the local surgeon and request adding an extra arm. Things don’t work quite like that, though. Real-world experience, some self-help books, and researches done by some really smart guys tell a different story about productivity and success: If you want to go to a specific place, advance in a specific field, stick on doing one thing till you get there.

So, take a shower if you tried the experiment above. Today you’re going to learn why you should focus on doing only one thing and ditch everything else.

The Horrifying Truth About Multitasking And Productivity

The number one thing that I hear over and over again from business owners, bloggers, parents, students is that they simply don’t have enough time to run their businesses, write, take care of their kids, do their homework. Just stop someone on the street and try asking him about something, anything. He’ll immediately respond, “I’m busy. I don’t have enough time.” Well, even though it might be because you look suspicious or because you smell, it’s true. People are buried in work.

So, if it’s some relief, you’re not alone. Everyone on this planet is busy AF.

But why is that?

Let’s look at them one by one:

1. Some Many Things To Do

You no longer just eat, you eat and watch television. But while watching and eating, you also decide that it will be a good idea to scroll through your social media profile. We all do it. It’s normal. And it’s normal because there are so many things out there. Thousands of blog posts, podcasts, books, funny memes, and videos of guys attaching a dozen clothespins to their faces.

It gets even worse when I spot something in my apartment that triggers me. The bowl of cookies standing on the counter for example. Or my son’s cool toys.

But even if your apartment is clutter free, our devices are a gateway to an endless stream of information. We need a thousand years to consume all the current information available. And since we know that we don’t have 1,000 years to our disposal, we try to hack life and absorb a couple of things at the same time.

The word multitasking arrived in the scene in the 1960s. At first, it was used to describe computers, not people. The guys from IBM wanted a word to portray the computer abilities to execute multiple tasks.1 At its core, multitasking in computers is about multiple tasks sharing one resource (the PC CPU). Multitasking automatically interrupts the running program, saving its state and loading the saved state of another program and transferring control to it.

While you chat with your friends online, your laptop can play music and download the latest season of your favorite series without an issue. But humans are not computers. If you try to respond to each of the five social media interactions simultaneously, you won’t be able to. Unless you visit the local surgeon for an extra arm as mentioned. Or, hire someone to take care of your busy social life.

Smart scientists concluded that when people attempt to complete many tasks at the same time, or alternate rapidly between them, errors occur, and stuff takes far longer to be complete – often double the time or more – to get the jobs done than if they were done sequentially.

Nevertheless, someone though it will be really cool if we can do like computers. “Let’s multitask! Since computers can do it, we can!” Probably we were so sensitive that we can’t imagine that a grey box can do more than us.

We can’t. Get over it. If you don’t believe me, see the comparison below:

Why Doing A Lot Of Thing At Once With The Intention To Become Ultra Successful Doesn’t Work?

It’s tempting to get into a habit of dwelling in a constant sea of information and long to-do lists, thinking you’ll cheat life and achieve miraculous success.

Let say you want to become a successful blogger (or YouTuber). Obviously, you’ll need to write articles to get traffic and therefore make money. But while blogging, you also want to create at least 15 online courses and videos that teach people how to plant avocado, pineapple, and other exotic plants. Along with that, you’ll also have to learn how to actually create the site you want and also how to cut videos.

So, you start grinding. You write, you record, you do your research, you check articles on how to design your site and so on. Your progress looks something like this:

After 3 months of hard work, your progress is unsatisfactory. Simply because you can’t do everything at once. There aren’t enough hours in a day to publish a good article, record a video, go to work, and keep your relationship going. Eventually, you quit because you don’t see any point of continuing with this torment.

A natural question will be this: Why people get involved in so many things at once?

The reason for this is twofold:

But big success comes from the opposite of what most people strive to do: doing fewer things, well.

Instead of trying to please everyone; trying to become popular on all social media channels; trying to learn 5 different languages all at once. Let’s focus on only doing one thing.

If you do the above, your progress will look like that:

Imagine progress like filling your car with fuel. If you fill only one car with gas, you will get further away than if you have to fill five different gasoline cars with fuel and a limited budget.

What Happens When You Focus On Doing One Thing

Once you focus on doing only one thing, a lot of good things happen:

Proof of the one thing principle is everywhere. Apple, for instance, have only one smartphone – the iPhone. They concentrate on doing only one device per year. Even though the other phone manufacturers produce a couple of different phone models per year, they aren’t even close to the sales of the iPhone. Apple’s phone still dominates the market even after the recent declines in results.2

Google is another good example. Their main products is search. They became Google, because they focused on doing only one thing exceptionally good – give people the best results ever.

Athletes are another example. You can’t win a gold medal if you strive to do a lot of different things. You need to choose a specific category.

How To Find Your One Thing?

Well, it really depends on what you’re trying to do, but the question you should ask yourself every time there are a lot of things on your to-do list is the following: “What’s the one, most impactful thing I could do today that will help me get closer to the desired success?”

If you’re trying to lose weight, usually changing only one thing in your life will have a huge positive impact on your overall health. For instance, you can stop eating sugar. Or reduce the intake of junk food.

If you’re trying to popularize your blog, focus on daily writing. Forget about the long-hour researches or trying different tools that suposedly have to bring you a tremendous amount of traffic. They don’t work. Traffic from ads is expensive and it doesn’t bring the desired results. If you want a bigger audience, you need more blog posts. And more blog posts are produced only if you write regularly.

Success is not complicated. It simply requires many repetitions of the same task. This is why only 4% of the people succeed and 96% fail.3 Most people can’t stand doing the same thing, day in, day out.

If you’re trying to increase your sales, follow Brian Tracy’s 100 Calls Method. This method is simple. You simply focus on calling 100 prospects as fast as you can.4 You don’t care whether they respond in a positive or negative manner. Your goal is simply to make 100 calls as quickly as you possibly can. Some of them will hate you. Others won’t. But if you can make this routine part of your life, this will change your career.

As you can see, there’s nothing sexy about doing these things. They are often considered boring. But they work.

You don’t need to become the next Einstein or the next Mozart. You simply need to commit on doing the simplest – most probably boring – thing daily.

You can’t invent time. Nor become ultra successful at two completely different fields – rocket science and stand as a live mannequin in storefronts where you could occasionally change poses and outfits.

Don’t believe what society is trying to impose us, multitasking is not something you should strive to do.

If you really want to make progress and make a lasting impact in the world. Find one thing and do more of what actually works. This is the secret to greatness.

“Be like a postage stamp – stick to one thing until you get there.” Josh Billings 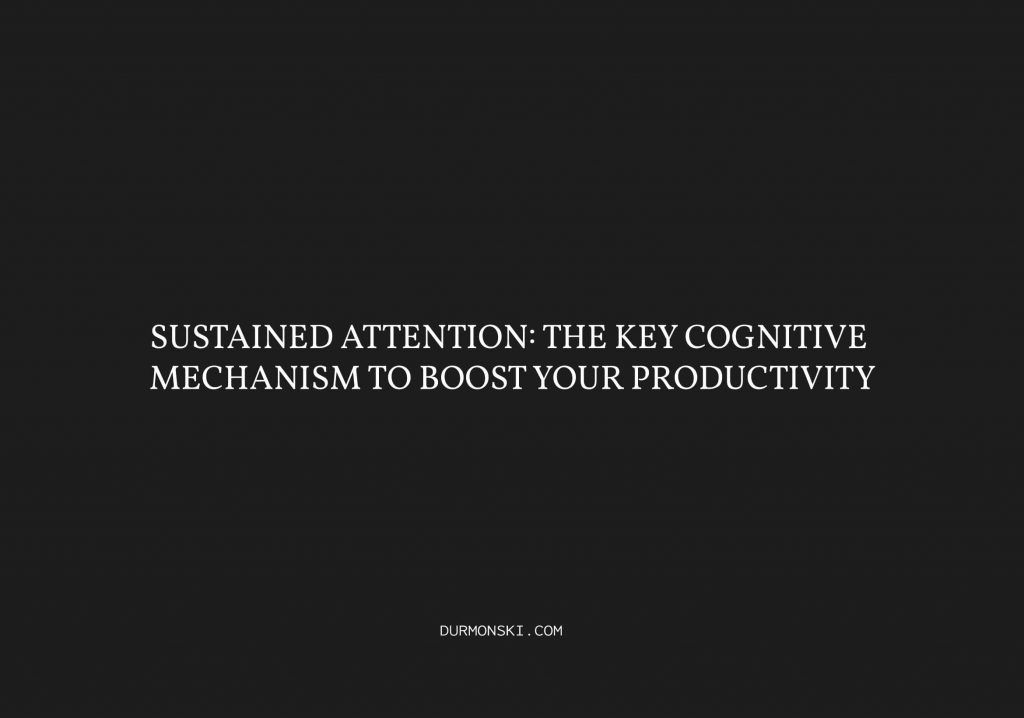 Sustained Attention: The Key Cognitive Mechanism to Boost Your Productivity 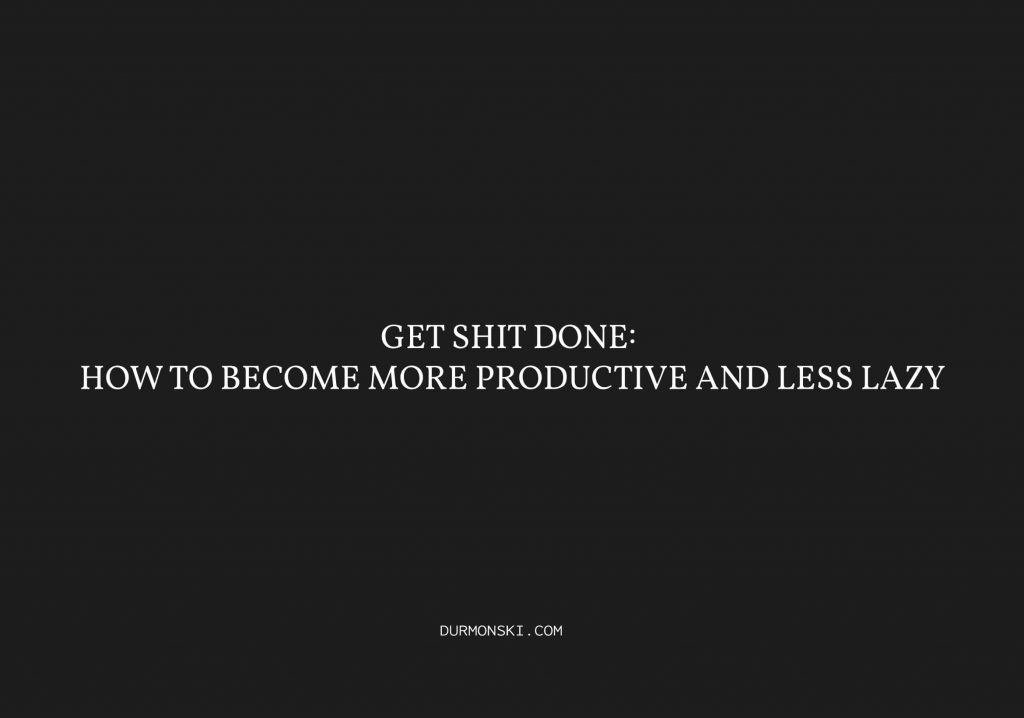 Get Shit Done: How To Become More Productive And Less Lazy 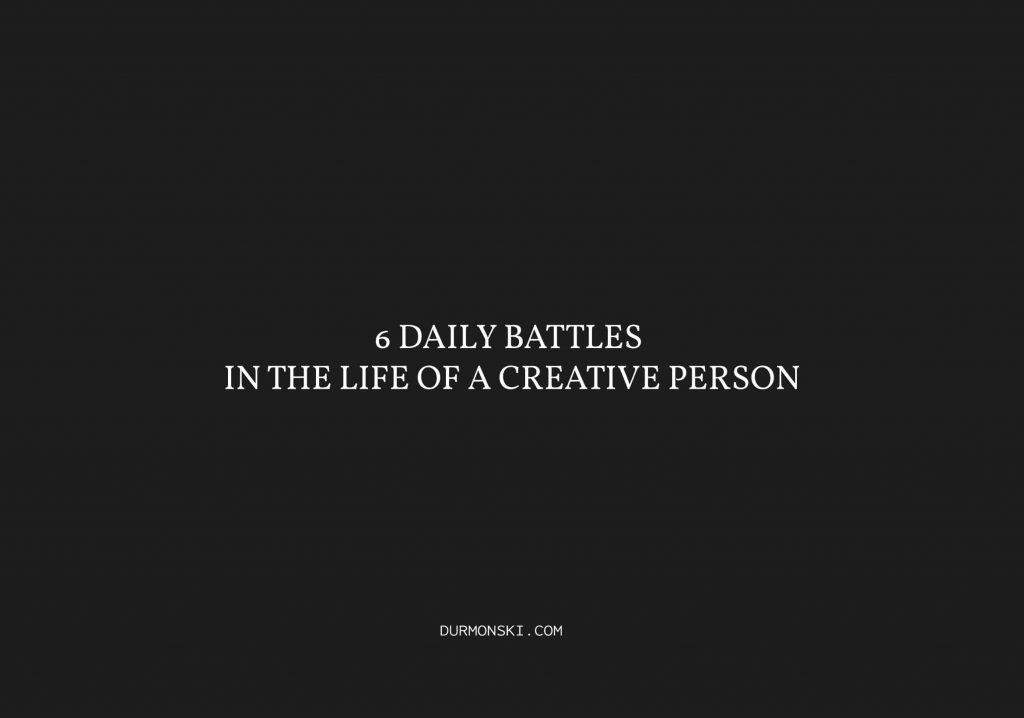 6 Daily Battles In The Life Of a Creative Person