Do you consider yourself a stupid person? Do you often feel overwhelmed by the pending day-to-day tasks requiring your attention? Do you think that the theory of relativity is an absurdly complicated piece of information? If you answered “yes” to any of these questions, odds are you’re really smart. Smart enough to know how stupid you are. Congratulations! You’re not a dumbass. You can pass that piece of content to your friend who thinks he knows everything. It’s not for you.

This article is about the crazy stupid ones, the misfits, the extremely dumb, the know-it-all smarty pants, and also for the ones who still think that the world is flat. You can argue with them, bombard them with facts, speak really slowly, send them back to school, but they’ll keep coming back, dumber than ever. They push the human race to degeneration and balk to those who read books and appreciate art.

But don’t worry, you’ve come to the right place. This page provides, free of charge – pictures included – short guide on how not to be stupid. Below, you’ll find the information you’re looking for to finally raise your IQ and to finally understand why you shouldn’t stick screwdrivers into electrical outlets. Read carefully. Actually, read it twice. As an extreme precaution, you can print it and glue it on your car windshield.1

Join me today as we are going to explore the avenue of dumbness.

The Definition of Stupidity

And while you think that being stupid it breathing car exhaust, it’s something a bit more complex. But don’t worry, I’ll go easy on you.

If we look in the dictionary, you know, that big book with a lot of words inside, we’ll see that stupidity is defined as “behavior that shows a lack of good sense or judgment” and “the state of being silly or unwise.” But these are way too complicated expressions.

I want to use simple words and abbreviations you’ll actually understand.

So, let’s look at the following situations: Say you’re watching Wrestle Mania. It’s your favorite show. And if you ever watched Rikishi doing a stinkface to someone, you know how the show starts, by stating “Be smart. Be safe. Please, don’t try this at home!” But you know, you’re a dumbass and you ignore this message and you perform a Tornado suplex on your younger brother which, unfortunately, results in a 911 emergency call and your brother stuck in a wheelchair for the rest of his life.

So, even though you were warned not to do this, you had the information at your disposal, it did it anyway. If that’s not sheer stupidity I don’t know what it is. But I’m not here to judge. I’m just here to explain why you’re doing such awful things.

So, after chewing on the above for a while we can safely conclude that stupidity is disregarding crucial information.

We can rephrase it as not stopping at a stop sign. You saw the stop sign but you decided that it’s not for you.

But let say you didn’t hear/saw the disclaimer when the show began. Say you were taking a dump while the show started and you didn’t hear the obvious warning message. In this case, if you still perform a deadly leg hook belly-to-back suplex to your brother and a similar emergency happens, does this makes you stupid or you can walk away with no-going-out for a month curfew?

Well, it does. Though you didn’t see the warning, anyone with any common sense and even a pinch of brains would have known that performing a bending-waist stunt to your fragile sibling is not something you should do.

But let say you have neither of the two.

We can rephrase this situation as bird pooped on top of the stop sign a.k.a that-is-why-i-didn’t-stopped-at-the-stop-sign-mister-police-officer.

But cops won’t care. You should know better. It’s common sense to stop and look around when there is low visibility on the road.

So, after all that trash-talk, we can conclude that stupidity is composed by the following two things:

Mastering these two will make you a brighter person. But say you don’t consider yourself a dummy. Well, we need to first talk about this:

But What If You Don’t Think You’re Stupid?

Trying to salvage your mind from below average thinking is just a waste of time if you don’t consider yourself a stupid person.

That’s why first, I’m going to prove to you that considering yourself as a bit dumber, even if you’re not mentally retarded, is actually a good thing.

I know. I know. It sounds counterintuitive and bizarre. But hear me out.

See, when people don’t think they are stupid they don’t think they should improve themselves. It the same as saying, “If it ain’t broke don’t fix it.” For example, if my car is running smoothly, I won’t run to the repair shop every week. However, if I don’t regularly change the oil, tires, filers, etc., the only thing my car will be good for is being crushed by a bigfoot monster truck on an event.

So, the way a stupid person operates looks like this:

Since they are stupid, they don’t realize that they’re stupid and they don’t do anything do change this fact.

There is actually a thing called the Dunning-Kruger effect.2 In short, it states that dumb people are blissfully unaware of how dumb they really are. Or in other words, if you’re too stupid, you’re too stupid to figure out how stupid you are.

In contrast, people who often reflect on their activities and actions – people who actually think – often find gaps in their knowledge and seek ways to improve.

This repetitive cycle helps them to get better and smarter over time. But if for a moment they consider themselves as know-it-all kind of guy/girl, they’re ascent stops and only goes downhill.

So far the conclusion is the following:

Now, since I convinced you that you’re stupid and that you need to get a bit smarter, let’s see how we can be less stupid and finally stop thinking about microwaving ourselves.

What To Improve So That You are No Longer Stupid:

1. Lack of Knowledge: Or How to Improve Your Cognition and General Knowledge and Be Less Stupid

This one is rather easy – if words like easy and learning can coexist in your small grey matter.

You just need to engage yourself in a wide variety of activities and experiences that can help you expand your world view. Or in other words, do things you haven’t done before. Most common activities are:

The main idea here is to expand your understanding of the world. It looks something like this:

That’s it about point number one. Easy-peasy, right? The next point is a bit more complex. If you’re already mentally exhausted you can take a break to recharge…

2. Ignoring Crucial Information: Or Why We Neglect Important Info?

The second, more important, reason on why we act stupid is ignoring vital information. We do this mainly because there is so much going on around us. We’re literally bombarded by information. The mixture of social media messages, constant new information, being outside of our normal comfort zone, relying way too much on others, creates a deadly cocktail: stress, rushed decisions, walking barefoot on a cactus. We lose focus and we do stupid dumb shit.

Basically, we know what we need to do, but we just don’t do it properly for whatever reason. In most cases, because there’s a lot going on around us.

Imagine the following situation: You’re driving around the city. You know how to drive. You’ve more than 10 years of experience. Suddenly, someone calls you on your mobile phone. Without hesitation, you pick up and you start talking. It’s your wife. She’s a mess. She just got fired from her job. At this point, an avalanche of information starts pilling on top of your brain: the mortgage, the college, all the savings, the overdue credit card payments… What are you going to do? All this bombards your brain like the airstrike on the Presidential Palace in Baghdad on 20 March 2003 and you overlook the traffic in front, leading to a collision.

That’s why both texting and talking over the phone are illegal. In fact, approximately 390,000 injuries occur each year from accidents caused by texting or talking while driving. And we’re not even mentioning drinking while driving.3

The worst of all is the last. If you’re worried about an upcoming operation you’ll be more likely to do stupid mistakes on tasks you’re quite comfortable with doing otherwise.

So, what we can do about this?

The simplest thing: Don’t rush when making important decisions or while doing complex tasks. Also, avoid making impulse purchases especially from self-declared online gurus. Except from me. I’m smart you know. I read and shit.

Take your time when a situation occurs and when a decision needs to be made. The stupidest thing you can do is to act fast when something bad happens, ignore crucial data and let your emotions control you.

If you think that you’re a real genius. That you’re perfect. You have a problem. You’ll never understand your issues and shortcomings. Therefore, you won’t do anything to get better. You might think that people are laughing with you, but in reality, they will be laughing at you.

In contrast, considering yourself as a bit dumb has its own benefits: You’ll understand your own deficiencies which grants you the ability to work on them and improve as a person.

So, being a bit dumb isn’t so bad. Of course, as long as you don’t chase bears into the woods to get a selfie or bathe in kerosene while smoking. You can consider stupidity an advantage. 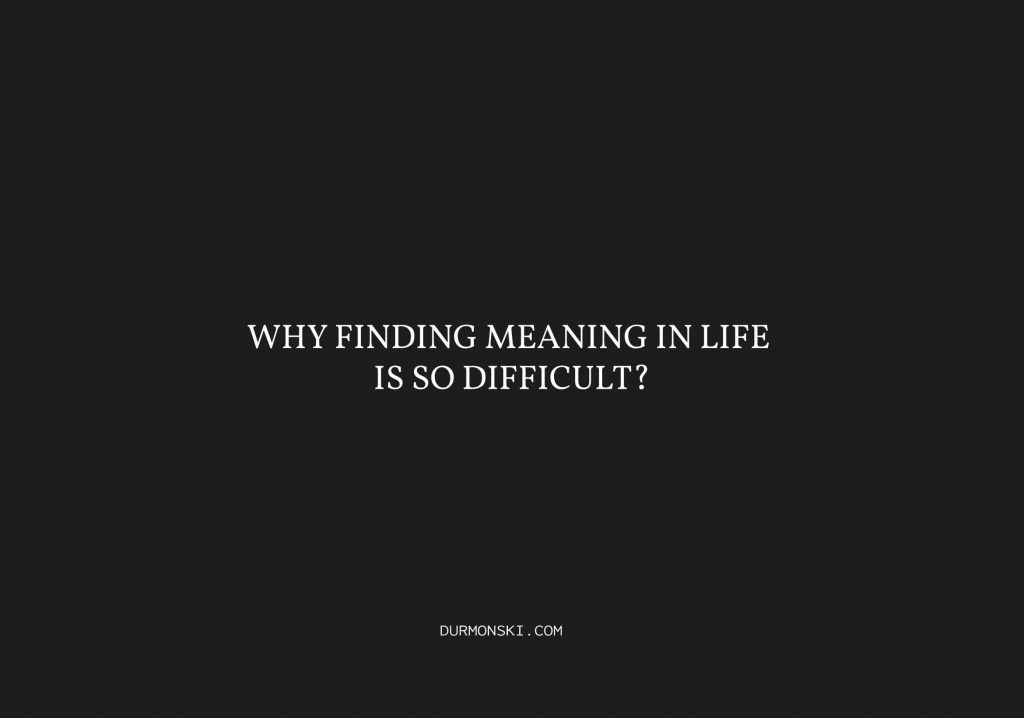 Why Finding Meaning in Life Is So Difficult? Why Curiosity Is Better Than Being Smart? 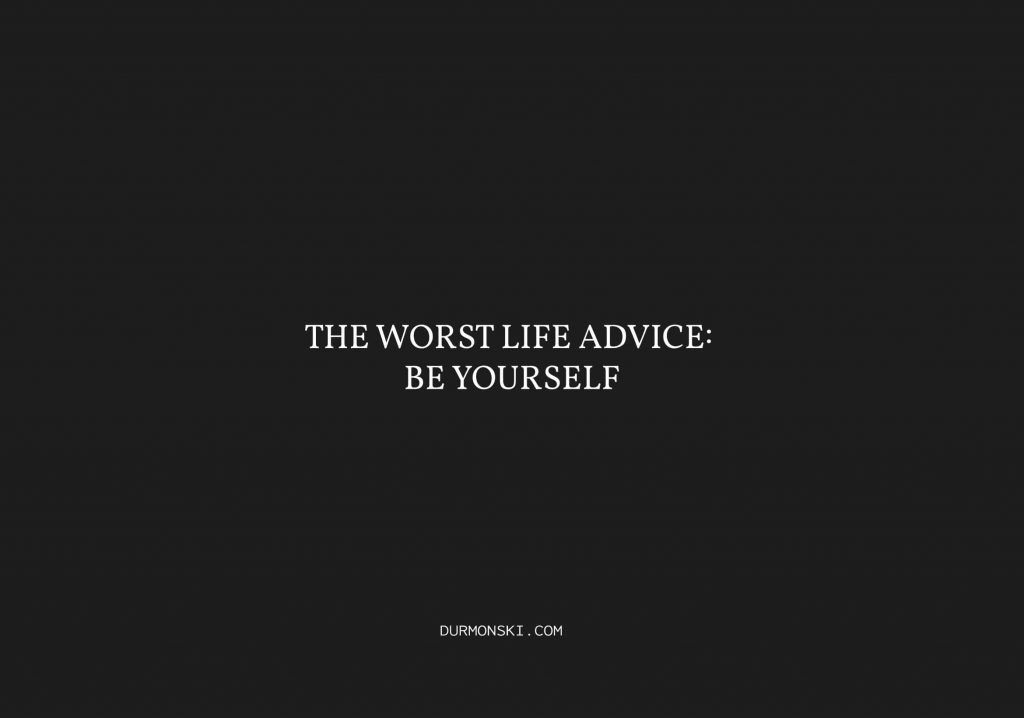 The Worst Life Advice: Be Yourself