Ahh, it’s finally January of the new year. Finally, you’re going to get rich. Like every year before that, your new year’s resolution involves getting these dollar bills, purchasing a Ferrari, obtaining a huge house with 7 bathrooms (because why not 7), and wearing only Prada. “No more frozen pizza and riding my bicycle to work. Absolutely no way. NO SIREE. I’m going to bathe in benjies till I die!”

Contrary to any universal logic and common sense, in the first few days of each new year, the majority of the population will promise the most absurd things to themselves: “This year my friend, it’s going to be different. We’re going to get that beach body. Get that deal. Hustle like crazy. Stash mountain of racks. Become diamonds-wearing, Phantom-driving, champagne-popping gangsta. For real!”

People wake up on the 1st of January, still half-drunk and still shaking from the pills they took last night and say “f*ck it, I’m going to become a millionaire!”

Even though there is absolutely nothing wrong with that – I’m all about getting shit done and setting high expectations and goals for yourself. The average citizen, if you haven’t noticed already, is in debt and in bad physical health.

So, statistically speaking, you’re going to fail in achieving your goal.

But I’m not here to demotivate you or kill your dream of becoming a millionaire gangsta. We’re already enough emotionally injured knowing that both Santa and the Tooth fairy don’t exist.1 We don’t need another kick in the feelings. We need dreams, hopes, and ways to achieve our ambitions. But we don’t necessarily need goals. Here’s why:

The Standard Way Of Setting Goals

The traditional ways of setting goals with saying something like this: “I want to grow a mustache and lose 30 kilos so I can look fucking awesome in summer shorts.” Chicks dig ripped guys with beard, so who doesn’t want to become that.

So, with the intention to have more sexual intercourses than last year – meaning more than 0. You get a full year of gym membership at the local club. Throw away your razor, and you promise to yourself, and to your online community – by writing a detailed post on Facebook about your goals hoping for more likes – that you’re going all-in at becoming shredded like Arnold Schwarzenegger and Helmut Strebl combined.2

The next day, you force yourself for the transformation. From an alcohol-abusive slacker who eats pizza 3 times per day. You constrain yourself to workout 5 times per week, drink proteins and blindly follow what online people share on social media. Soon though, this sudden change becomes tiresome.

After a few months, a lot of times after only a few weeks, your visits to the drill hall are less frequent. Your facial hair causes itching and you’re one step away from shaving all the progress.

“I can’t go any longer. This calcium-fortified plant milk tastes like shit. I feel like the gym is moving further away from where I live. I’m still not muscular like the dudes online. I need a burger and a beer!”

Then you go to the local pub and you eat 10 burgers with extra fries and bacon. As soon as your tongue touches the crunchy meat which later evaporates in your mouth and satisfies each taste receptor in your body, you throw away your membership card in the trash bin and light the whole thing on fire. All of this accompanied with these words: “burn bitch, burn!”

But it might be different, you might get an online course and purchase a few fitness books. “These things will surely make me a ripped master. That’s what the cover says. So, that’s what I’m going to do!”

How We Deceive Ourselves With Self-help Books and Courses

Let’s say that in addition to visiting the gym, you also get an online course that will show you, step-by-step, how to become super strong.

Let’s say that you found the perfect online course: “Get Ripped While Growing A Mustache!”

“F*ck yeah! That’s course was designed for me.”

You go ahead and you spent 500$ on a 3-months training program only to find out, a few weeks later, that nothing really changes. At least not the way you wanted to.

Even though the course offers some great insights and strategies for growing facial hair that can potentially outshine Santa’s beard – it’s full of tips and tricks for increasing your muscles. You’re still disappointed because you need to go to the gym and actually work out. The course is somehow not doing the heavy lifting for you.

“WTF! This guy is a fraud. I’ll get a refund and leave a bad review for this course. My mustache is even worse than before and I’m not even close to having a physique that removes female underwear from a distance.”

But like the famous online saying goes: “Growing a beard takes patience. The kind of patience it takes to deal with your shit.”

The reason you’re back on your couch watching the latest TV series and eating the same shitty food after having a quick affair with the local club is simple: You put all of your hopes on the program, on the end goal, on outside factors.

We tend to rely a lot on – and here I mean a whole lot – on things, courses, people to do all the work for us: “I’ll bye this course, and it will transform me into this sexy rapper girls adore!”

We never consider what’s behind the goal we set. What’s the real ingredient for achieving the desired state of success.

Yes, going to the gym will surely help. But that’s just part of the game.

daily actions. Our habits. Our lifestyle.

These are shitty goals to begin with.

Instead stressing so much on reaching a certain state. Focus on the daily actions that will make you such a person.

That is, changing your habits and adopting behavior that basically destines you to get fit. This includes simple things: eating healthy, training regularly, avoiding alcohol, resting properly. The key here is to execute these things frequently.

I know, I know. All these things sound painfully obvious. It’s not like we don’t read articles about this all the time published on sites where you can barely see the content from the avalanche of ads. We have headlines 9 Daily Habits That Will Change Your Life; Get In The Habit: The 30-Day Habit-Forming Challenge… and a million similar.

There are so many articles about habits and habit transformation that we can easily get lost and can’t be quite sure which set of habits we should first enroll in our lives.

But these fancy articles serve no real purpose. They again, stress mostly on outside factors that will make you overly strong and athletic. But before I reveal the secret, let’s go back to the previous question: Why settings goals work?

The answer is simple but at the same time not so obvious.

Setting goals is sexy. It’s easy. Fun. It sounds cool when you publish it online and feels f*cking amazing when people praise you for only saying a bunch of stuff that you’ll never actually going to do because you love eating 15 oz burgers than exercising regularly and eating grass for dinner.

The not so fun part:

When we’re setting goals, we don’t quite get what’s behind them. Dreaming about a beach-perfect body sounds cool and all but all activities that will potentially make you slimmer are not so interactive: waking up early, finding time to workout, avoiding sugar and fat, not drinking, doing this every-single-day.

If you’re 30 and if you’ve never stepped foot inside a gym before. You’re friends don’t go to the gym also. There’s around 99.9% chance that you’re wasting your money on the gym membership if you don’t first realize that appearing Instagram-worthy on pictures requires a load of work + a couple of years to be complete.

Actually, even if you reach this state in which your body has under 5% body fat, you then need to continue doing what you’ve done so far because otherwise, your muscles will hang like a ballsack. Meaning, there is never an end to a goal.

Getting fit is not a permanent state. Even if you lose the extra fat by working out, it’s not like you can stop once you’re there. If you want to keep the chick-magnet body with you for a longer period of time, you need regular maintenance: waking up early, finding time to workout, avoiding sugar and fat, not drinking, doing this every-single-day.

“Let’s cut to the chase. Enough bullshit and pretending you know all the answers. Spit the secret advice that will make me ripped AF and also tell me where I can buy the best 15 oz burger?”

Instead Of Setting Goals Do This

Goals point the way. But they alone can’t help you do what you want to do.

Let’s take the “growing a mustache” example. Even if your facial hair grows beautifully, you’ll still need to cut it and nurture it. Instead of saying “I want to grow a mustache and have Baywatch body,” your definition for greatness should involve a change of lifestyle: “I want to become a person who eats healthy, trains regularly and treats his facial hair with respect.”

See the difference between the two?

The first suggests that there is an ending while the second is a continuous state.

That’s how the life of the people who set goals looks like:

Here’s what happens when people figure out that change only happens when we’re constantly progressing and adopting a certain lifestyle:

Reframe the goal. Instead of wishing to become muscular, aim for slowly changing your way of life.

A ripped person exercises regularly; Eats food low on fat; Doesn’t drink alcohol; Drinks plenty of water. But most importantly, he continues to do all of the above even if his body reaches a state that influences the underwear of a woman from afar.

This, of course, applies for any type of goal you set: writing a book, starting a business, learning a new language, etc.

You can easily spot the problem with setting goals now, right?

There’s never an ending. Meaning, the hard work will not end after a year, even after 10 years. It’s a way of living if you want to be better. Few are the ones who can bear the weight. That’s why there are so few people who can take off their shirts in front of other people and still have an ego.

Society generally underestimates the needed efforts for someone to become successful and to remain on top. We do so because we think, we believe that success is a place. A destination you reach and you’re safe when you’re there. But that’s not the case.

As a vivid observer of human behavior, I can tell you that our actions are leaning towards rest. Towards activities that don’t require a lot of efforts: shopping, social media, watching television. And since the common way of living involves watching videos while eating nachos, when you set a goal to get fit your lifestyle confronts your new ambition. And guess who wins? It’s surely not the new “getting a beach-body” mentality. Why? Because 1) it’s hard, 2) you’re looking for quick results, 3) never consider making small changes in your lifestyle and lowering your self-sabotaging behavior.

So, instead of setting goals, aim to make small adjustments in your lifestyle. They’ll have a permanent effect on your life when repeated. Can One Wrong Decision Ruin Your Life? 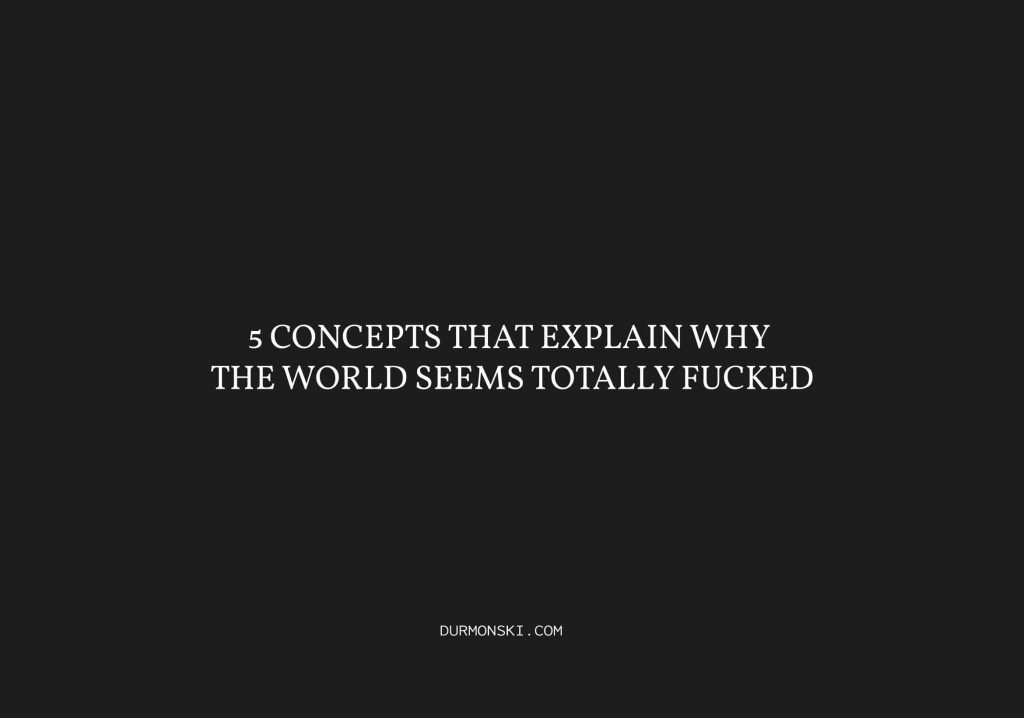 5 Concepts That Explain Why The World Seems Totally Fucked 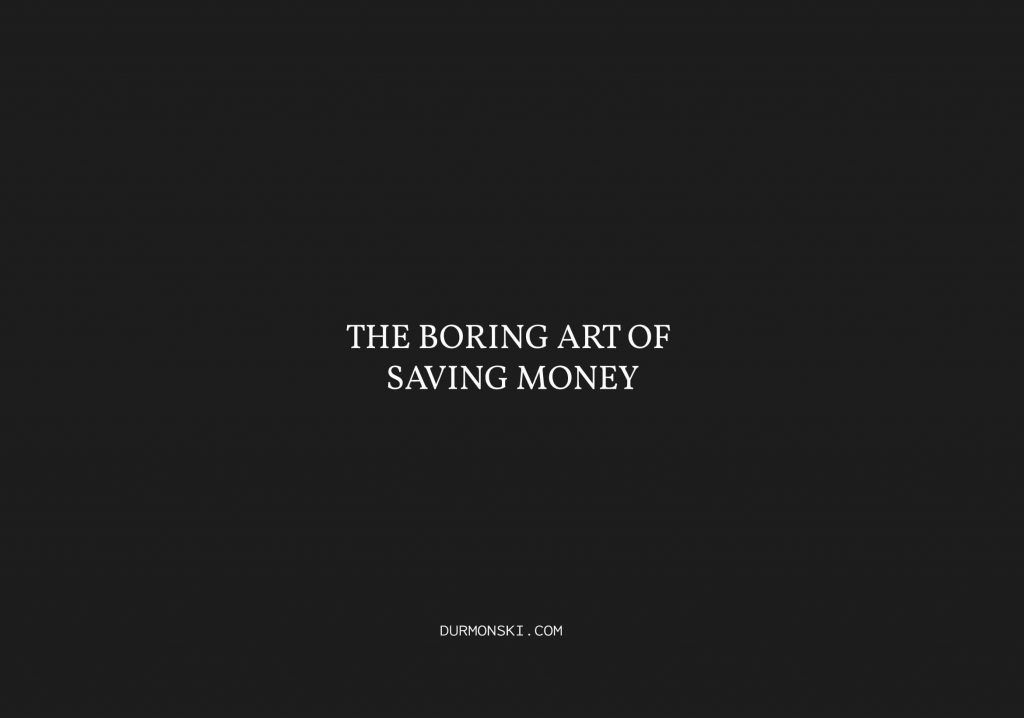 The Boring Art of Money Saving