Before I even thought about writing the first article that will later be published on this site, I asked myself: “Do we really need another motivational website? We already have Ton Robbins, Tim Ferris, Robin Sharma, The Minimalists, and all the other guys and girls who will help you become better. How I’m different than them? And more importantly, what I can bring to the table that will be different and at the same time helpful for the people reading?” When you think about it, the answer is always No. You don’t need another website. Yet again, I started this one…

Do we really need another blog where some random dude, who we never met, who calls himself a guru, shares tips on how to live our lives?

Why should we read and consider what he is saying? Why should I even bother to subscribe his email newsletter, remember his strange name, or waste my time checking his social media account?

Generally speaking, we shouldn’t listen to some random dude online and we don’t need another site with tips on how to become better.

Even though it’s so obvious that one more site will only make thing worse, in reality, the answer is always Yes. We need another motivational website.

In this article, I will explain why. But first, let’s see why motivation is important:

Why We Need Motivation?

There are hundreds of people who are experts online.

We see their well-designed sites and the big number of people following what they are doing and we wonder: “Why there are other people who try to do the same since this dude is expert?”

Obviously, the number one reason is money.

People, no matter the nationality, gender, or whatever, all want to live the easy life. Or, let’s say a life where they are in control.

The number one reason people start a website is to earn either more money or to simply create their own company and eventually quit their 9 to 5 job, which is again related to money. But in the second scenario, you are your own boss and if something doesn’t work out you can kick your own ass.

Thanks to the internet and the modern technologies, you can exchange the office work with such that involves pressing buttons on your keyboard while drinking coffee in the comfort of your own home.

I will expand a bit more about the money desire later. Now, let’s see why we need motivation:

To explain this easier, I want you to imagine that motivation is a drink. Something like the beverage Coca Cola.

When you’re thirsty > You go to the store > You drink Coca Cola > Your thirst is satisfied.

A few hours later, you repeat the same process again because you will get thirsty a couple of times per day at least. We can’t satisfy our thirst for water.

It’s the same with motivation.

You’re tired, sad, your last project sucked big times, your plans failed, your girl left you for some other dure, you farted while you were giving a presentation today. Basically, when we feel like the world is about to end, we read something motivational, watch a short YouTube video, speak with someone, and our faith in our project is rejuvenated.

We’re about to quit > We read something motivational > Your belief that you can make it is restored.

Once we hit the brick wall again, we repeat the process.

But yet again, do we really need another motivational website?

Do We Really Need Another Motivational Site?

When you feel down, you think that your project suck and you’re about to quit, check what Gary V is posting on one of his social media accounts. This dude farts motivation. I’m sure. 1

He will get you back on track in no time.

But since people like him exist, why do we need other sites that are basically the similar version of Gary V?

Even though they are different people most of the so-called motivational speakers talk about the same things.

In reality, we need another motivational site because we’re all different.

Some will think that what Garry V is saying, posting, writing sucks. Others will share and comment on his every post cheering him for his every word. We’re all different and we like different things.

Some people like Windows OS, others Apple OS. Some people drive sports cars, other’s motorcycles, while third, like me, use a bicycle.

But that’s not the only answer.

We need more motivation in general.

More motivation is always welcome. Especially in this busy world full of noise.

More Motivation Will Keep You Going

The more we surround ourselves with positive words, positive people, inspirational quotes, the harder we’ll push. The farthest we’ll go and the more we’ll achieve.

The opposite will happen if…

If you’re regularly checking your Facebook account and you’re constantly exposing yourself in front of accidents, news about crisis situations, articles where people feel lost, you’re meeting with people who only talk about getting drunk on Friday night. In this scenario, you won’t achieve much.

It will be a surprise if you make both ends meet.

Have you ever heard the saying: “You’re the average of the five people you spend the most time with.”2

It’s kind of true, you know.

But one more thing is also true: The information we consume is also shaping you as a person.

Or in other words, what I’m trying to say here is the following: The more people we have publishing content about “you can do it”, “work harder”, “hustle bro”, the higher the chance the average person will become, well, not average.

It’s best to be bombarded by positive things and ideas that will help you overcome the temporary struggles products and articles that will only waste your money.

Because this is what happens:

When we consume bad things, we end up doing bad things.

The opposite of this is the following:

When we read, watch, speak with positive people, and we do good things for both ourselves and society, goods things will happen. We’ll accomplish our goals, we’ll donate money, we start something that might change the future of other people.

But this is true for all other things. It’s not only about motivation.

It’s not only about “do we really need another motivational website”, it’s “do we need new things in general.”

Do We Really Need Another Site in General?

If you’re reading this, there is a high probability that you’re working on some sort of a project. Something new: a new piece of software, a new productivity planner, app, Facebook page to unite more people.

However, me and you both know that this thing you’re so busy doing is most probably a newer version of what’s already out there.

That’s why every time you sit on your desk, go to your workshop, and you begin to work on your tasks you’re questioning your efforts: “Shouldn’t I do something different?; I’m probably wasting my time; The other thing is better than mine; I should quit;”

They think about starting a website, for example, but when they open their browser and see what’s already out there they convince their mind that there is no point of starting: “Everything already exists. I should get back to my video game.”

There are hundreds of thousands of book, bicycles, phones, apps, gurus that will help you become better, but there is room for one more.

There is room for your own thing.

If there wasn’t, there would be only one band, one book, one type of car, one religion. And as we all know, there are plenty of options in each mentioned category.

We live in a world where the number of goods largely exceeds the people’s needs.

Since that’s the case, why not create something yourself?

What You Can Bring To The Table That Will Be Different?

Since everything exists, what you can do that people will want?

What will differentiate you from others?

Let’s answer the this questions first:

What You Can Do That’s Different?

In most of the cases, what we see it’s simply a newer version of what’s already available and known to the masses. Consider it like an upgrade.

For example, the first phone was invented in 1876 and the first telephone line was constructed between 1877 and 1878.4 The phones we use today are better, yes, but their core functionality hasn’t changed. We still use phones to speak with people who are away from us.

The same applies to pretty much everything: forks, spoons, tires, desks, houses. We are rarely creating new unique things. We’re just upgrading the things we know.

All “new” inventions are basically falling under one of these 3 categories:

People either copy, or combine a few things to create something that will later be called new.

Let’s look at the one by one:

As you can see, a lot of things can be done differently simply because the combination of things is endless.

What will differentiate you from others?

Even if you decide to copy something from something else. Even if you write a review of a book, even though you’re in a way copying what the author is saying, you’re still creating something different.

Because you are the one creating it.

Even if you have a twin brother you’re still a unique person with unique thoughts.

So basically, there is room in the world for your thoughts, your ideas, and your story.

Whether you’ll decide to motivate others with videos, words, quotes. Or, you’ll aim for something bigger: Inventing Social Media that doesn’t suck, for example. The important thing is to realize that the world needs another site. Another invention. Another idea.

That what’s made me create this site. No one else can create the content I’m creating simply because there isn’t another Ivaylo Durmonski.

The same applies for you.

If you’re still wondering whether you should start a project, or not, stop and look around. Do you see another you?

If you don’t, then no one else is capable of telling your story. 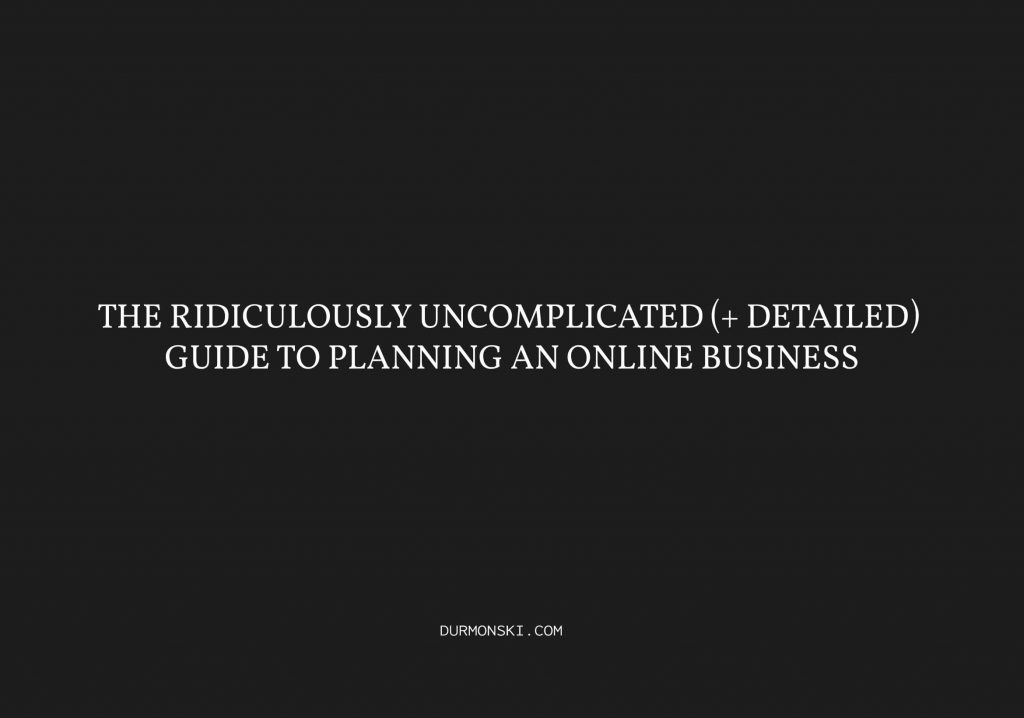 The Ridiculously Uncomplicated (+ Detailed) Guide To Planning An Online Business 7 Mental Models for Business Owners to Stay in Business 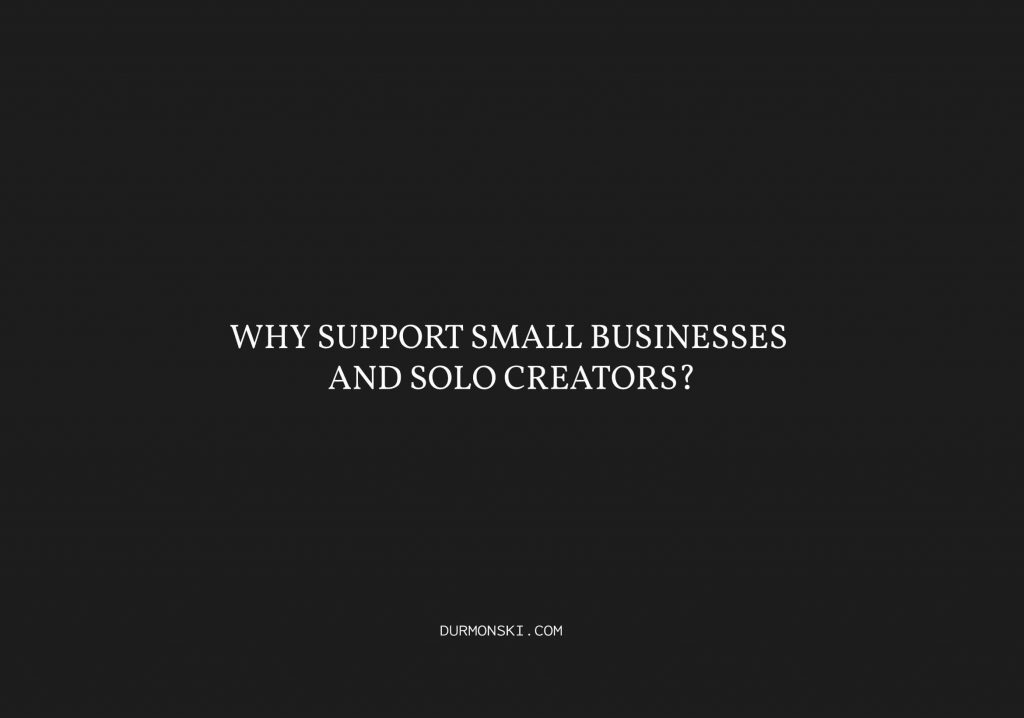