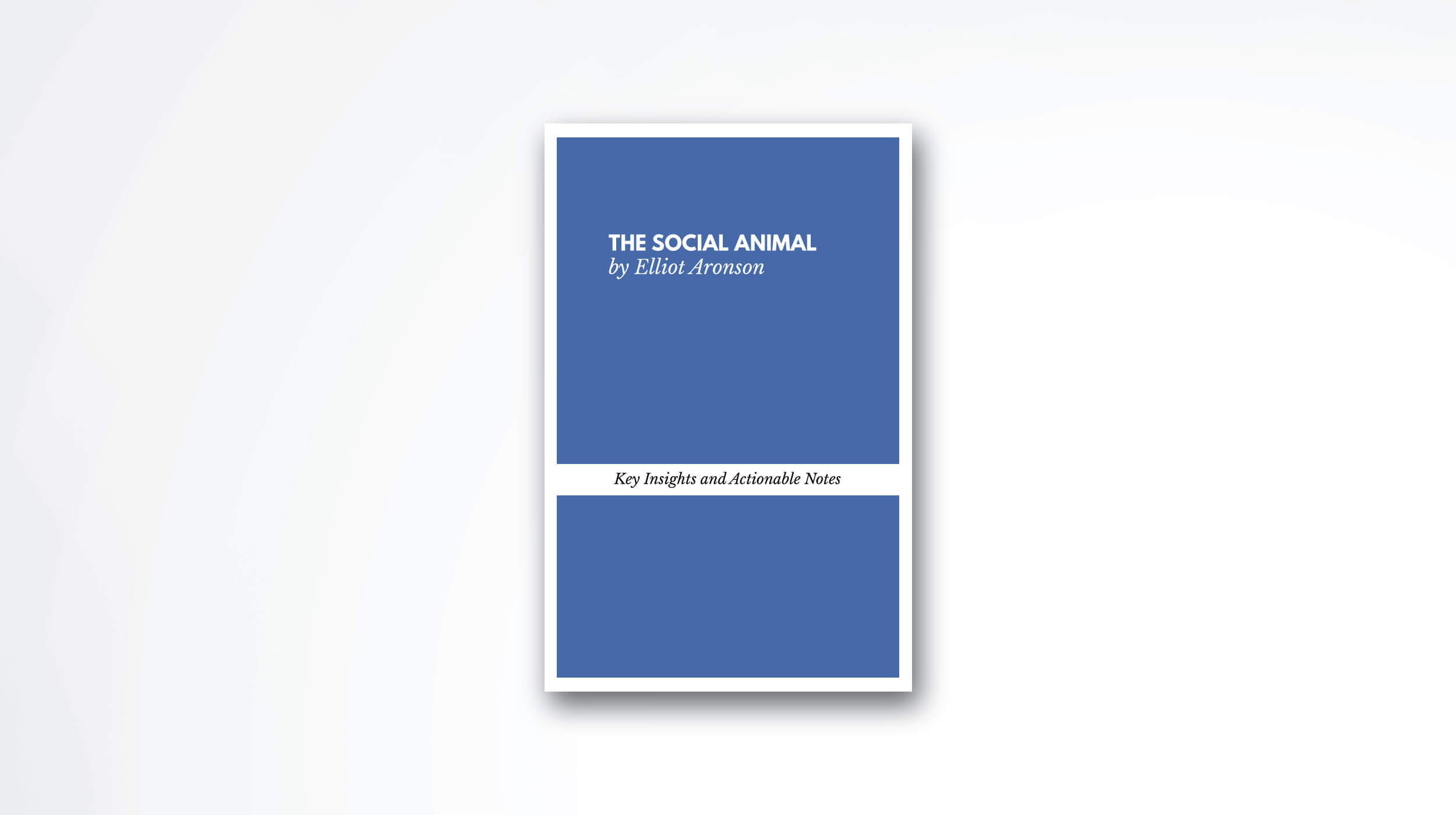 Deep down inside, we’re still animals. In The Social Animal, the authors are describing in details the essence of social influence. The book is here to explain how someone develops prejudices against an ethnic or racial group; how does one person come to like another person; how we interact with others, influence them and how we’re being influenced by them. The book is an attempt to understand human social behavior. A very good attempt I must say.

Understanding social psychology is extremely important. It’s an art of predicting how people’s thoughts, feelings, behaviors occur. By doing so, you have the power to make others feel better and also make them perform beyond their own know limits.

5 Key Lessons from The Social Animal:

Lesson #1: Why Understanding People Is Important?

Whether we like it or not, we are surrounded by fellow humans. Our lives depend on our daily interactions with them. For instance, when going to the local store to buy something, on our jobs, while driving around town, walking down the street. We try to look independent in front of others, but in reality, at any given moment your life may depend on the person sitting next to you.

Imagine a situation where you are in an elevator with another person, a colleague of yours. This other person is someone you don’t like, and he kind of knows it. Last month you were both working on a project and you had a fight with him about what color to use for the presentation background. With each passing floor, the tension and hatred are both increasing. Suddenly, there is a loud sound of metal being crushed. You feel it with your whole body and your arms instinctively cover your ears, which doesn’t make it more pleasant. A moment later, the metal prison that supposed to take your asses to the top floor shakes for a moment, like it warns what will happen next – you start falling. In the middle of your final prayer, the elevator suddenly stops, sending both of you on the floor, but unfortunately breaking your leg. The doors slightly open, leaving enough space to escape from this nightmare. However, the vibrations going through the whole structure are clearly stating that this idle position won’t last for long. At this point, you’re no longer capable of moving on your own. Your colleague who is laying right next to the open door starts creeping through it. Just before he moves his whole body from the tiny hole, he looks back at you. Then he…

Is he going to help you? Or watch you going all the way down? Well, this is something that was probably predetermined weeks ago.

We spend so many hours trying to understand how different software or machine works. We read books, watch tutorials on the topic until we master a certain topic. Still, we never take the needed time to figure out the people we work, live, and communicate with. What drives, motivates, disgust them. What makes them angry, sad or what kind of thing will put a smile on their faces. We don’t think that this is important. But it is.

Social psychology is extremely important because it helps you understand the secret needs and desires of the people around you. It can play a vital role in making the world and your personal life a better place. Take the needed time to observe the people around you. Take notes if you have to. It will be worth it.

Lesson #2: How Society Influence Us

Conformity is the change of someone’s behavior or opinion as a result of the people around. It’s basically the behavior norms which are imposed on us by society. That’s why we all pee in designated places, also known as restrooms, not on the street, or in front of others.

It’s important to understand how society influences us. It will surely help you in certain individual situations and also in your long-term life. The following 3 concepts will help you get started:

Effort justification is the reason we don’t appreciate free stuff, or stuff that we achieve too easily. Let me describe a situation from the real world so you can understand this term better:

Suppose you are looking to hook up with a girl. If she gave away too easily, you will immediately think that she is an easy girl and that she does the same thing with every man who buys her a drink. There wasn’t a chase. Nor a fight to win her over. That’s why the sole thought in your brain the moment you wake up beside her is to get out and never see her again.

I know, it’s a very shallow thing to say, but it does happen in the real world. We think the same way about pretty much everything that comes too easily into our hands: free books, free accounts, free information. The effort we put into a task will determine the expected outcome.

If you work hard, every single day in your daily job, you will probably want something in return, right? A raise, a reward, or simply being mentioned in the monthly newsletter sent to all the employees – if your company is into these kinds of stuff. If you get it, you’ll feel great about yourself and you’ll probably work even harder. However, if you’re constantly slacking, and if you get a raise, your motivation will drop. You work less but start expecting more in return.

You can use this basic human understanding to build an image of an inaccessible person to attract the attention of the opposite sex. Women use this technique all the time. By playing hard to get, men tend to want them more. Which, of course, resonates in full with the mentioned above.

Another purpose of this social tool can be used to increase the value of your brand, site, business. Being different, innovative are only a few of the ways to make more people buy your products. Making something limited, in terms of quantity, however, will create the desired buzz around your product, which will eventually lead to more people trying to sign up for your updates, newsletter, products. When the effort (price) to obtain something increases, it also increases the value of it.

Another important term that will help us understand our own actions, and those of the people around us, better, is the term known as behavior justification. In short, this means that we justify our own actions no matter how bad they are.

Precisely because of the above, if you ask a prisoner sentenced for lifе, “are you guilty?” Тhe answer you will get, in 99% of the cases, will be: “I am innocent! I was framed!” Although these people have been brought to justice, a judge and jury decide the sentence, they still think they’re innocent. Why’s that?

Before we answer, let’s talk about something different. Let say you’re about to make a decision about purchasing a new laptop. You set a budget, then, you start reading and watching reviews online, comparing specifications. Finally, you decide to purchase a Lenovo laptop. What will happen next? Your behavior will change favoring the brand you’ve just trusted with your money. You may even begin talking more about Lenovo laptops. What people say will no longer be registered in your brain. The decision is already made, your brain now considers Lenovo as the best laptop on the market. Period.

When we make a decision, or we act in a certain way, we internally convince ourselves that this is the best decision we could’ve done. Especially if this is in regards to something difficult. Even if that thing is harmful to us, we still “tell” our mind that’s “it’s ok.” That’s why we stay so long, sometimes forever, in relationships that are destroying us. Also, that’s the reason we smoke, drink, do drugs. We know it’s slowly killing us, it’s scientifically proven, but we still keep doing it. Why? Because we’ve been smoking for the last 5 years. If we admit that smoking is harmful it will mean that we’ve been making dumb decisions for the past 5 years.

Let me ask you something, would you believe a man – wearing а tracksuit, sneakers and thick black glasses – who stops you on the street and kindly asks you for 10 bucks? He also promises to return the money in less than 10 minutes. Also, he is keen on letting you keep his ID card for the time he will be away. 10 dollars is a small amount, but it’s definitely not a sum you will give to a stranger on the street. It’s your money, right? “Yes, he mentioned that I can keep his ID, but if this is a stolen card it won’t matter. Police also won’t move a muscle to make a case for 10 bucks. So, it’s definitely a no-no.”

Now, imagine the same situation but this time a man wearing a suit, with nice shoes, freshly shaved, good manners asks you the same thing. What would you say? Hmm, I am sure you will think about it twice and probably even consider giving this well-shaped-model-looking-guy 10 of your precious dollars.

So, what’s the point of all of this?

Often we buy things just because our favorite athlete is recommending them. Same applies when we visit the doctor. We believe his judgment – a stranger in a white coat – more than what our mothers tell us.

We can use this in our favor.

Even though we transcendence all living things on this planet we still remain animals deep inside. The main difference is that we have technology. We are like monkeys with smartphones.

I’ve always been fascinated by social psychology – why other people, and me, behave the way we do and what makes us click. That’s why enjoyed reading The Social Animal.

The book it’s like a novel full of real-life stories that explore the human mind – how we behave in different situations and what motivates us. Even though the writing is mostly firm and scientific, it’s still a very interesting read. You get to understand why people do some crazy things, what inspires them, how mass media is trying to persuade us and influence our every decision, and more.

The thing that stayed with me long after reading the book is the fact that we’ll all remain animals regardless. At least to some extent. We’ll act brutally, we’ll try to dominate others and continue to do stupid things for more money and fame. Even so, we should strive to lower the effect of the animal hidden inside and give more exposure to the human.

No one should be forced to do something he doesn’t want to.”

Aronson’s first law: People who do crazy things are not necessarily crazy.”

Short book on the importance of reading: