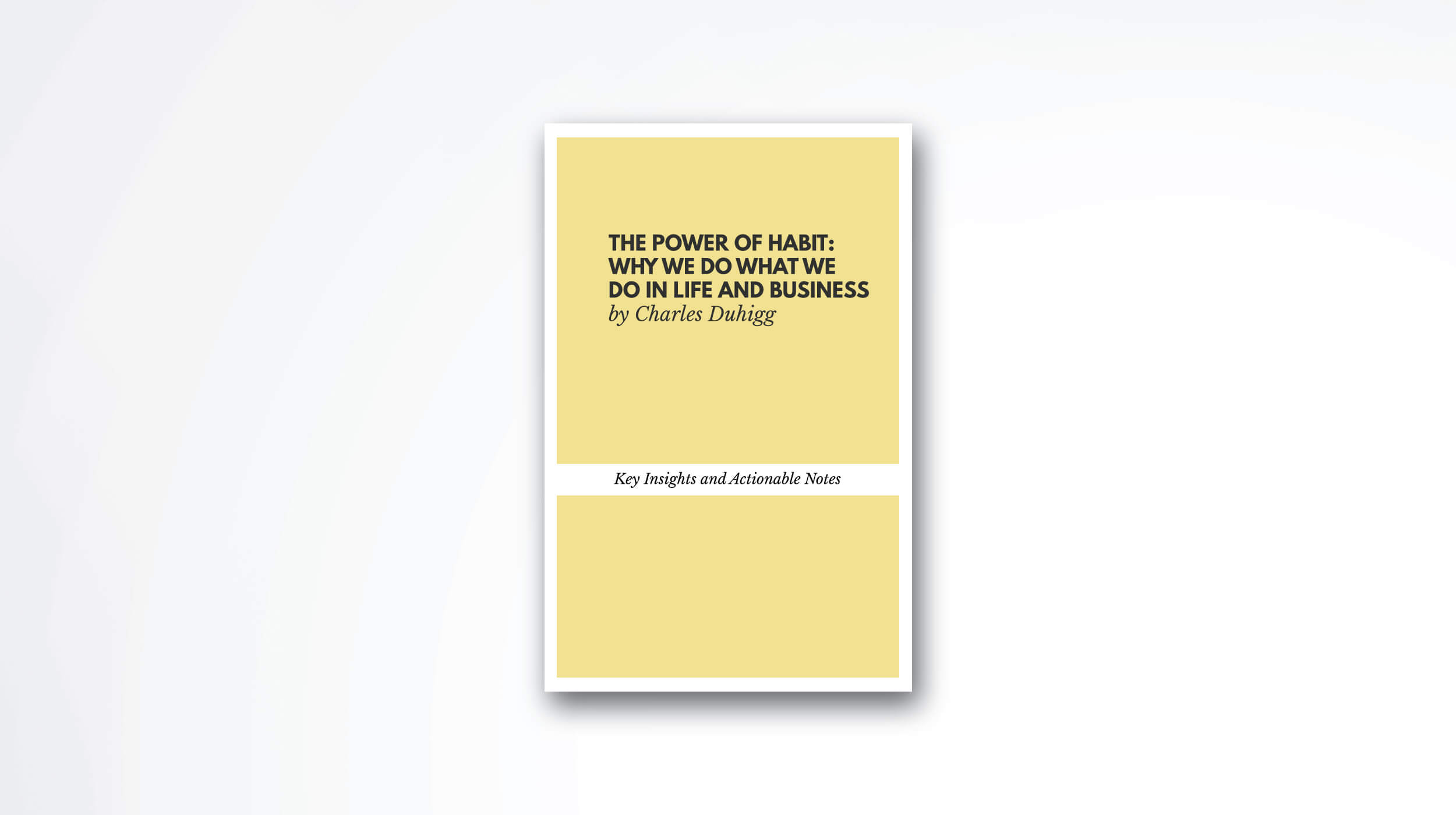 Actionable Book Summary: The Power of Habit by Charles Duhigg

Humans are creatures of habits. By analyzing your behavior you can pinpoint your bad habits and more particularly, the isolated actions that are holding you down. By doing the latter, you can cleanse the self-sabotaging behavior, replace it with such that acts for your interest, and finally thrive. Healthy habits are the cornerstone of a successful, happy life and what the author is sharing in The Power of Habit is surely something you’ll want to master.

You don’t need to make drastic changes in your life if you want to lose weight or if you want to stop smoking, you simply need to replace your current routines with such that will work for your interest. Or in other words, replace bad habits with good ones.

5 Key Lessons from The Power of Habit:

Lesson #1: Why Habits Are Formed?

Think about your daily actions. Like, really think about all of the things you’re doing in a single day, you will quickly understand that in a lot of occasions during the day you’re executing really complexed tasks without ever thinking about them.

We can take driving for example. You’re driving, parking the car, maneuvering around other vehicles on the road, shifting gears if you’re driving a stick without giving much thought about all of those things.

When we’re learning how to drive we’re super focused and some of us can’t even listen to music while they are behind the wheel because they can’t concentrate. I took me a couple of months till I finally figure out how to shift gears without giving too much pressure on the car. Now, I do it automatically. I don’t even think about the gears, I know when to switch. I’m sure you can relate.

So, how tasks that previously took us months to master are now executed effortlessly?

According to the research in the book, habits occur because the brain is constantly looking for ways to save energy.

Basically, our brain is trying to automate pretty much everything we do because this will free up more time for rest. And it’s doing this in the background. More time for rest equals better chances for survival. It’s that simple and that’s why habits are so important.

Or in other words, if we automate tasks that are not helping us in the long-term, we’ll fail. In contrast, if we embed patterns that are beneficial for us, we’ll soon crush our goals.

Lesson #2: Your Choices are Important

Forming and building permanent habits has a lot to do with our decisions.

Before a certain behavior is formed and before it becomes automatic, we first have to make a decision. When this decision is repeated a couple of times, it then starts to become automatic behavior. Or in other words, a long-lasting habit that’s hard to break glues in the back of your brain.

If every time you walk the fridge you decide to take a biscuit your mind will record the steps. If you do it a couple of times your mind will then prompt you to open the fridge whenever you pass near it. Because, this is what you’ve been doing for the last 10 times.

I had this nasty habit when I was little and living with my parents. I opened the fridge to check if there is something sweet to eat. When there was, I ate. I did it for years, that’s why I do it automatically now. I get up, go to the fridge, I take something, and while I eat I “wake up” and I see that I’m holding a cake. No wonder I wasn’t able to lose weight for years.

So, if you want to break a bad habit or stop some sort of repeated action that won’t be so helpful in the future make sure to acknowledge what you’re doing before “opening the fridge” becomes automatic for you. Understand that you control the situation and the decision you’re going to make now, can interfere with your future success.

“No” to things that don’t bring any value to your life in the long run.

Lesson #3: The Cycle of Habits

The brain has invented a simple system in order to distinguish things that are happening around us so it can consume less energy. Basically, the brain is looking for some sort of a signal before start giving commands to the body.

Here’s a simple example: We see food, we want to eat. Seeing food is the cue. Other times feeling hunger is the cue. The stomach is trembling, we search for food.

The cue acts like an activator and once the brain sees it, it plays the predefined set of steps: We see food (cue), we start eating (action which becomes routine).

Except for these two, there is one more thing:

The running in our brain is a three-stage cycle – according to Charles Duhigg. It starts with the cue, which basically tells the brain to switch to automatic mode. The cue will tell the brain what behavior to choose. After , the routine action kicks in, which can be physical, mental or emotional. Finally, we get the prize. If the prize is worth it, the brain will save the cycle for later use.

Once again, this is the whole process:

The more we repeat a certain cycle, the more it becomes part of our lives. At some point, we don’t even think, we see the signal and this triggers a behavior.

Imagine a sprinter who hears the sound from the gun. The judge fires the gun and he starts running as fast as he can to the finish line.

That’s why you’re reaching for your phone when you wait in line, or when you don’t have anything to do. It’s because you’ve executed this task thousands and thousands of times: You see people waiting (cue), you reach for my phone (action), you feel good after seeing funny pictures and colored notifications inside your social media account (reward).

Since the prize in the above scenario feels good, the brain records this action for later.

The solution to remove this pattern in your life?

Lesson #4: The Golden Rule of Habits

Habits are not an easy opponent to beat. Forming a new habit on top of an old one or replacing a bad one often feels like an overwhelming task. Though there are a lot of articles and programs about habit change the simplest rule is shared in the book and it looks like this:

Basically, adjust your reaction to the cue. Because you can’t really fight the cue and the price.

For example, when you’re hungry (the cue), instead of eating a burger, prepare a salad.

It’s super simple, right? Instead of eating a burger, you can prepare a salad. The process is unchanged. You only switch the previous automatic behavior with a new one.

Sounds super simple but not quite easy for execution.

How many of you have tried replacing a burger with a salad and they’ve failed?

I’m surely guilty of the above.

So, there should be something more to the above, right?

Well, there is. If you eat burgers for years, you will surely need to do something more. Actually, two things:

If every time you’re getting a burger on your way home you need to change your route. This will add additional obstacles for you, thus you’ll be less likely to get a burger.

If you want to eat more salads you need to be sure that your fridge has all the ingredients for a salad.

If you want to stop the automatic action when you’re waiting in line or your bored – the above case I mentioned – you need to either stop bringing your phone with you in the grocery store or delete all of your social media apps.

Lesson #5: What Are Keystone Habits?

It’s impossible to transform your life overnight. To have a beach body, get a promotion at your work, be and feel healthier. You will need time. But according to the author of the book, some habits have the power to cause a chain reaction and change other habits.

Changing a single aspect of your life can help you create this momentum which can eventually transform your life for a relevantly short period of time.

A lot of people consider the following to be keystone habits:

For instance, if you exercise regularly this will surely help you be healthier. You will most probably choose to eat salads over burgers because you will not want to waste the efforts you put in the GYM. This persistence will eventually make you more responsible human being and help you thrive in other aspects of your life.

I’m exercising every-single-day for the past couple of months and this single habit helped me become more focused and also feel better in my own skin. I’m more confident in the decision I make which is also helping me when I talk to other people.

So basically, if you’re looking for some sort of a change, if you hate your life, you have money problems, don’t try to changing everything for a day or two. Start with simple steps. Change one aspect of your life and go from there.

Probably one of the best books about habits. I was able to read the whole book in just two days and I was super impressed by the writing style of Charles Duhigg. It’s full of examples and real-life stories that enhance what the author is trying to make as a point.

The book is basically a framework for understanding the mechanism of habits. Charles Duhigg uses research to explain how habits are formed and changed. Everyone knows someone who was out of shape, or was a smoker, and then in what appeared as if almost overnight, changed themselves for the better. How did they do that? They replaced the bad patterns in their lives with good ones, that’s how.

Totally recommend this book and the info inside. Especially to those of you who have some time-wasting addictions that aren’t bringing any real value to your life.

Change might not be fast and it isn’t always easy. But with time and effort, almost any habit can be reshaped.” Charles Duhigg

The Golden Rule of Habit Change: You can’t extinguish a bad habit, you can only change it.” Charles Duhigg

Rather, to change a habit, you must keep the old cue, and deliver the old reward, but insert a new routine.” Charles Duhigg