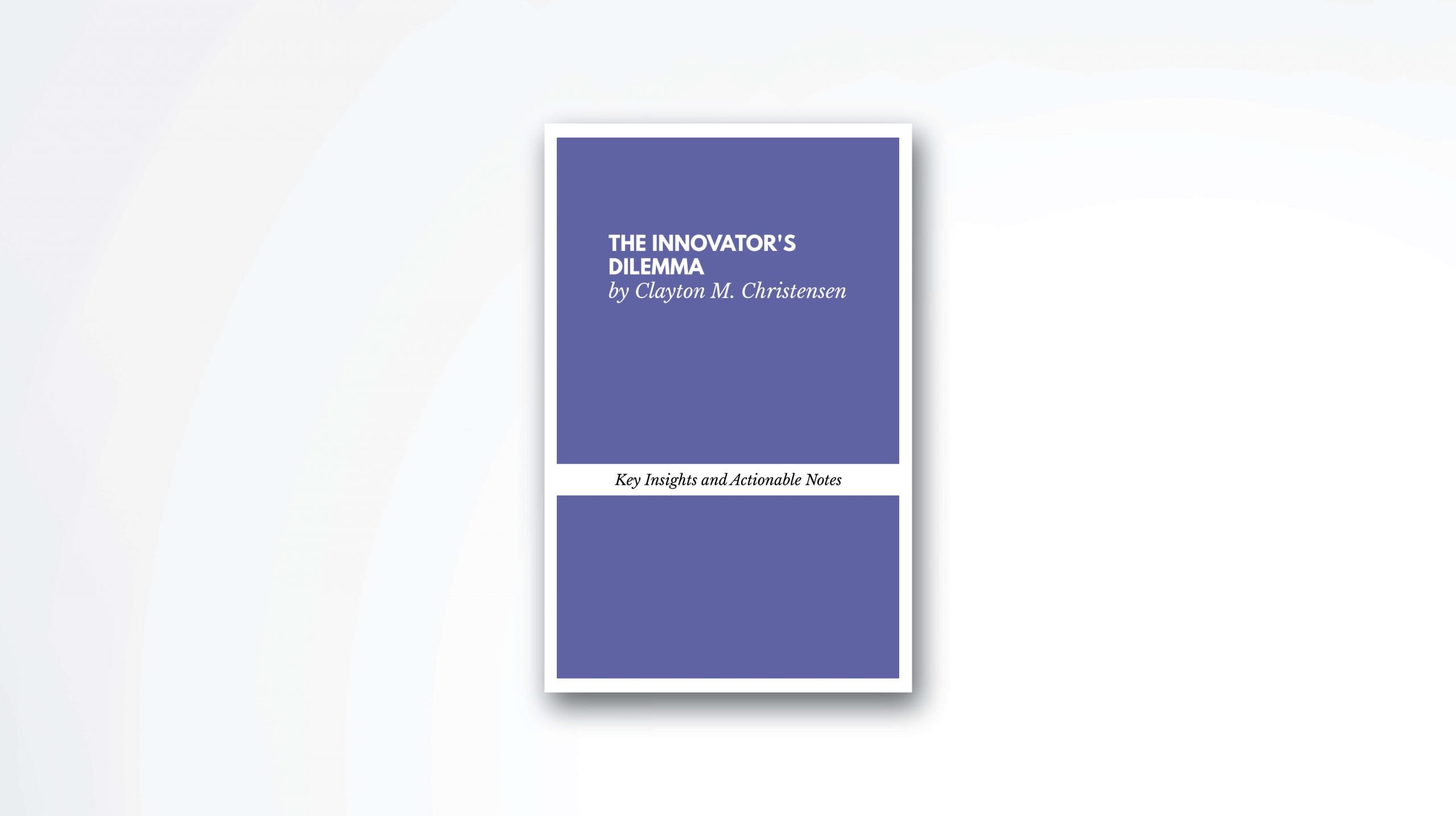 In The Innovator’s Dilemma, Clayton M. Christensen, explains in great length, how and why well-established firms, mostly in the IT sector, fail. How these close to god-like companies are unable to innovate when changes in the world happen and are therefore outrun by smaller companies who, thanks to their flexibility and fresh perspective, spot these so-called disruptive technologies (think: iPhone and Tesla) and win the big game.

The world is evolving and regardless of how cool your company is today. If you want to stay in business, you need to innovate. However, a lot of times the next big wave (i.e. potential big market) is still really small and unattractive. Hence, the innovator’s dilemma. Established firms ignore small markets because they can’t satisfy their need for capital. However, that’s exactly what they have to do – pursue markets that don’t exist – because that’s where the future big bucks lie.

5 Key Lessons from The Innovator’s Dilemma:

Lesson #1: The Difference Between Sustaining and Disruptive Technologies

It’s a war out there.

Competition is fierce and every day there are new players entering the battlefield.

As a leader of an organization, or a person who’s interested in starting his own business, you should know the difference between sustaining and disruptive technologies if you want to get a boatload of cash for what you’re doing.

Here’s a quick summary of the two:

These are well-established, already accepted by society products. Imagine gasoline cars or the smartphones we use nowadays. People don’t need to watch a series of YouTube videos to know what to expect from a smartphone. It will surely have a camera, a display, and an option to call people (though now rarely used).

And while entering a market full of sustaining techs isn’t risky per se, it’s still quite difficult as there are already a lot of players. You can’t really make it big if you don’t offer something new and interesting. Something “disruptive.”

If you’re not quite comfortable with the word disruptive (like me) you can simply read it as innovation.

These innovative markets usually emerge from existing, already established products but offer simpler, and a lot of times more effective proposition to the buyers.

However, initially, the disruptive tech is out of shape and the market is quite small or even nonexisting.

For example, a lot of times the first version of a tech product is bad. Some people can even call it a disaster (Remember how many times Tesla was close to bankruptcy?). The most recent example is the folding phone. Samsung launched its folding phone in 2019 and a lot of folks later reported that the screen broke after just a day. Still, who knows what will happen after a year or two. Maybe we’ll be all walking around with phones that unfold into laptops.

The main point here is that disruptive technology is the future. There’s great potential, close to zero competition, and the possibility to become Musk-like famous.

Naturally, though, people are afraid of pursuing new markets as it requires putting money upfront for something that has an unclear future.

Lesson #2: Big Companies Fail Because of Their Massiveness

If you have a 3 story house, a spouse, kids, and you own a bunch of stuff, it will be quite hard for you to move to another country and work the job you always wanted. Not impossible, but surely hard.

The same happens when an organization grows. They become so big and sluggish, that they can’t adjust when changes in the world happen. Or at least can’t act fast enough to seize a potential opportunity.

Fortunately, thanks to the findings of professor Christensen, you can study these reasons and make the correct adjustments.

Or in other words, big firms fail because they’re slow, data-driven, and are afraid of losing what they have. On the other hand, the only way they can stay in business is to take risks what they already have and invest in markets that seem “unworthy” at first.

Here’s why the book is called The Innovator’s Dilemma:

The current business leaders are where they are because they listened to their customers, invested heavily in new products, machines, warehouses, etc. Paradoxically, these same things are the reason a lot of times big firms go bankrupt – they listen to customers, invest in technologies…

This is one of the innovator’s dilemmas: Blindly following the maxim that good managers should keep close to their customers can sometimes be a fatal mistake.” Clayton M. Christensen

Why is this bad?

Mainly because a lot of times customers don’t really know what they want.

That’s why Henry Ford famously said, “If I had asked people what they wanted, they would have said faster horses.”

If you ask people, they’ll tell you that they want a faster, more secure, nicely designed car. But if you’re somehow able to massively produce flying vehicles people will immediately be careless of 4-wheel cars.

What you should be looking for is radical technological transitions and invest in them. Things like electric vehicles, cryptocurrency, and the most obvious example – online shopping.

Yes, even e-commerce is something I need to mention.

Yet, despite the obvious benefits of creating an online store over physical ones, there are still millions of people who believe that brick and mortar businesses are the way to make a living. People all over the world still invest all of their savings in small local stores which lasts a year or two instead of starting something online.

Lesson #4: Create an RPV Framework for Your Company

In simple terms, an RPV framework is a way to find out your strengths, weaknesses, and overall potential. It’s something like an audit of your business.

Let’s look at the three one by one so you can get a better idea:

Take some time to create your own framework and outline the main things in your company. This will not only help you make future decisions but also remind you why you do what you do.

It’s better to know this right from the start before committing to anything: You’ll most probably fail. Like, at least a couple of times before creating something people will want to buy from you.

This applies to everyone. It’s not only for settled companies who want to enter a new market. It’s also for people who want to start a weekend side hustle.

What you can do about it?

That’s probably the best advice mentioned in the book because your approach will change for the better when you expect to fail. You’ll not only better manage your resources, but you’ll also have the will power to continue since you won’t feel stupid when things don’t work out as planned.

So, don’t bet all of your resources on one product when starting. It’s unlikely to become the next big thing right off the bat. Anticipate failure, learn from your mistakes, iterate, and try again.

“Our initial stab into the market is not likely to be successful. We will, therefore, need the flexibility to fail, but to fail on a small scale, so that we can try again without having destroyed our credibility.” Clayton M. Christensen
Click to Tweet

In the majority of the text, the author explains in great detail how the disk drive industry changed throughout the years. And though no one uses floppy disks anymore (except for the Save icon) it’s a great way to understand how being stuck in the now prevents you from becoming great in the future.

To some, the research in The Innovator’s Dilemma might seem dated, but what professor Christensen was able to package in the book is more than just case studies of long-gone firms. He trains our minds to spot new opportunities and gives us a new perspective to have in mind for the future development of our business.

If you have an existing business this book will help you understand what you’re doing wrong and show you how you can adjust your future strategy.

If you’re still hesitant about starting something new because you think everything is already created, this book will surely motivate you. There are plenty of examples in the pages where start-ups were able to crush big corporations.

My key takeaway from the book is the following: Watch carefully what customers do. Don’t listen to what they say. Customers don’t really know what they want.

This is how things must work in great companies. They must invest in things customers want—and the better they become at doing this, the more successful they will be.” Clayton M. Christensen

To succeed consistently, good managers need to be skilled not just in choosing, training, and motivating the right people for the right job, but in choosing, building, and preparing the right organization for the job as well.” Clayton M. Christensen

Sign up for my newsletter and download the Reader's Kit. A set of printables that will help you keep track of the books you read and more.