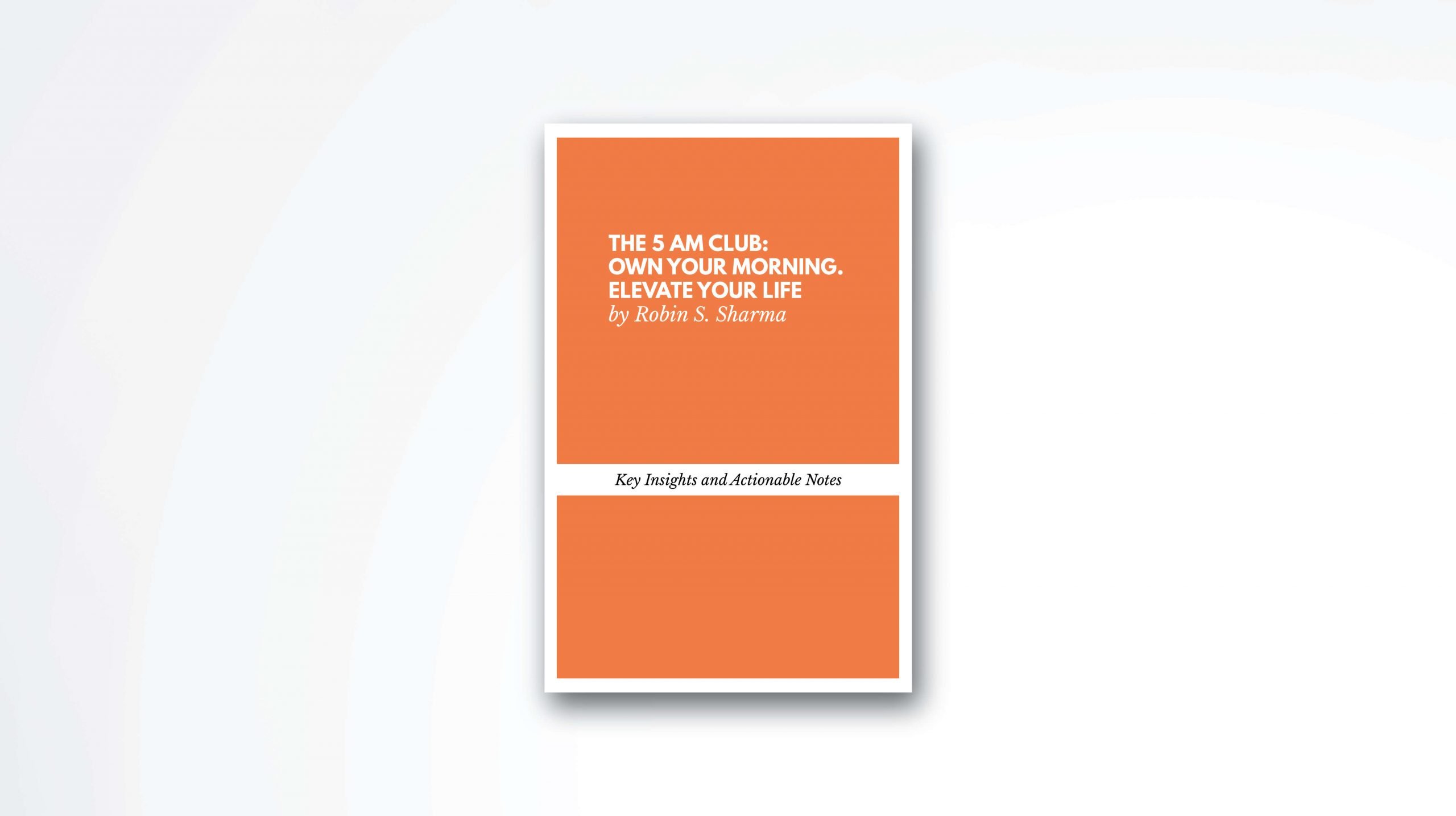 Actionable Book Summary: The 5 AM Club by Robin Sharma

Beneath the story about three strangers who wear clothes with cheesy slogans on them and crave becoming world-class for unknown reasons hides a simple message: get up at 5 am. In essence, the 5 AM Club is a collection of widely popular quotes connected by a tasteless soap-opera-like fairytale that will make you want to punch someone in the face – most probably the author, Robin Sharma, for writing this.

We’re slowly turning into a mob of cyber-zombies who crave more. If you want to become a true needle-mover, a world-changed, as the author loves to say in the book, you should not only be less interested in your social media following, but also schedule more time for yourself so you can get better at your craft. And since our lives are overpopulated with stuff to do, Sharma’s solution for having enough time to pursue our true desires – which could have been said in around 30 pages, instead of 332 – is to get up at 5 AM and perform a short set of routines.

The 5 Key Lessons from The 5 AM Club

A lot of people think that being active on social media is a social act, a noble act. You share stuff online and you think that you’re somehow improving the lives of the ones listening/watching.

In most of the cases, like in 99% of them, we share stuff to nudge our own ego. For instance, we don’t expose our new car to tell people that there is a new Tesla model. We do it to signal to others that we’re better than them and to hopefully receive some of praise from our beloved audience. As you can imagine, by looking it from the side of egoism, we can quickly realize that this type of socialism doesn’t lead to anything productive, inspiring. Quite the opposite actually.

By sharing how your life is getting better you’re 1) making others feel miserable 2) enforcing a consumerism mindset.

Robin Sharma, who also wrote The Monk Who Sold His Ferrari, of course, despise this type of online spamming and selfishness.

He’s a strong believer that true greatness comes from nursing others.

So, if you want to see a positive change in your world you need to become a bit more obsessed with the world of the people around you.

If you want to help people, if you want to create a worthy legacy, you need to focus on the need of others. To become less interested in your own egoistic drives and more concern in becoming in service of others.

Lesson #2: Focus On These Four Things To Become History-Maker

What’s that I hear? You want to become a world-famous magnate and cure the world of mediocrity?

No worries. There’s a section of the book that is specifically designed to amplify your skills and upgrade every part of your brain and body.

How the hell I was able to structure such a high intense sentence?

I borrowed the words from the book.

The main character in the book is called Mr. Riley. He’s ultra-rich, mega fit, and extremely noble. But that’s not all. He also has a bag full of tactics and strategies that aim to make you a better human being. One of which is called the four focuses of history-makers (quite a mouthful, I know). Here’s the short version:

Lesson #3: The Downside of Becoming Legendary

Apart from figuring out where to stash all of your money and where to park your yacht, there’s one more problem when you finally become god-like rich – the lack of balance.

When you’re busy working on expanding your business and helping more humans progress, obviously, you won’t have time for friends and family. Heck, you’ll probably won’t even have time for the people living in your crib – your kids and your wife.

In addition to that, your expectations will rise and you’ll demand from everyone (including yourself) to produce high-quality work. But since not everyone is flawless like you are, you’ll often feel frustrated when people present something mediocre.

Is there a solution?

Don’t reach for the golf stick when someone is not able to satisfy your high standards. Sit down with this person and have a decent conversation. Explain what you expect and give them guidance. Show them what they need to improve to meet your standards.

This also applies to you.

Often writers who sold millions of copies are afraid to start writing a new book because they fear that they’ll never exceed their prior success. To overcome this weary feeling they all do the same thing – they focus on making daily progress, even if it’s just one sentence. It might seem small and insignificant but over a long period of time, the compiling efforts allow them to produce great work.

By now I think it’s obvious what the book is all about – you need to get up early if you want to become empire-builder, needle-mover, and everything in between.

Still, one question remains unanswered: What to do when you actually managed to get up at 5 AM and change from your pajamas?

Well, worry not, amongst the overinflated words that represent a large portion of the book, there are hidden gems – like the 20/20/20 Formula that will guide you in your half-asleep mornings.

Here’s a short overview of this early-bird morning routine called The 20/20/20 Formula:

These are the steps but my personal recommendation will be to make adjustments based on your desires. For instance, you don’t necessarily have to journal for 20 minutes, you can write for 5-6 minutes and start doing deep focused work that will help you get better at what you want to do.

Also, 20 minutes won’t be enough to become the next Masterchef or create your own empire. You need to schedule at least a couple of hours a day if you want to see real progress.

Getting up at 5 AM will surely help you advance in your career and business but it’s not enough if you want to become a billionaire magnate like Mr. Riley – the mega-rich and audaciously generous character in the book who unknowingly why adopted two strangers to teach them stuff about life.

Anywho – the most mentioned word in the book – let me share one more uplifting model that will allow you to transcend above all other living creatures.

The last set of life-changing tactics mentioned in The 5 AM Club is called The 10 Tactics of Lifelong Genius model.

One rainy day I woke up and I wanted to change the world. Like, make a full makeover of the lives of the mortals roaming the streets. Unfortunately, The 5 AM Club wasn’t at my disposal back then and therefore I wasn’t able to reach my full potential and make the world a magical place where everyone is happy and butterflies are flying around. But you can do better. If you read the book, now, you have the potential to become a combination of legendary leader and an iconic athlete that can build a massive empire.

So, if you’re into cheezy, sugar-coated quotes sprinkled with big fake words go ahead, read the book. You’ll love it. But if you’re not a fan of soap-opera-like stories and you can’t stand fake stories that are intentionally boasted you’ll want to smash your head in the nearest wall.

There are sections that are actually practical, yes, but only if you can abstract your mind from the parts that promise quantum leaps in your productivity.

Robin Sharma wanted to create a charming story to appeal to the masses but it turn out to become a collection of big, overly inflated words that offer little value.

While reading, my bullshit filter was going strong. The only reason I keep reading was to see if things will eventually get better. Spoiler alert! They don’t.

My main take from The 5 AM Club: Help others get better. That’s the best way you can get better yourself. But since we don’t have enough hours in a day, you need to make getting up early a habit.

I don’t wish for an easy life because there is no growth of my powers there. Give me a challenging life—one that brings out the finest in me. For this makes an iron will. And an unconquerable character.” Robin Sharma