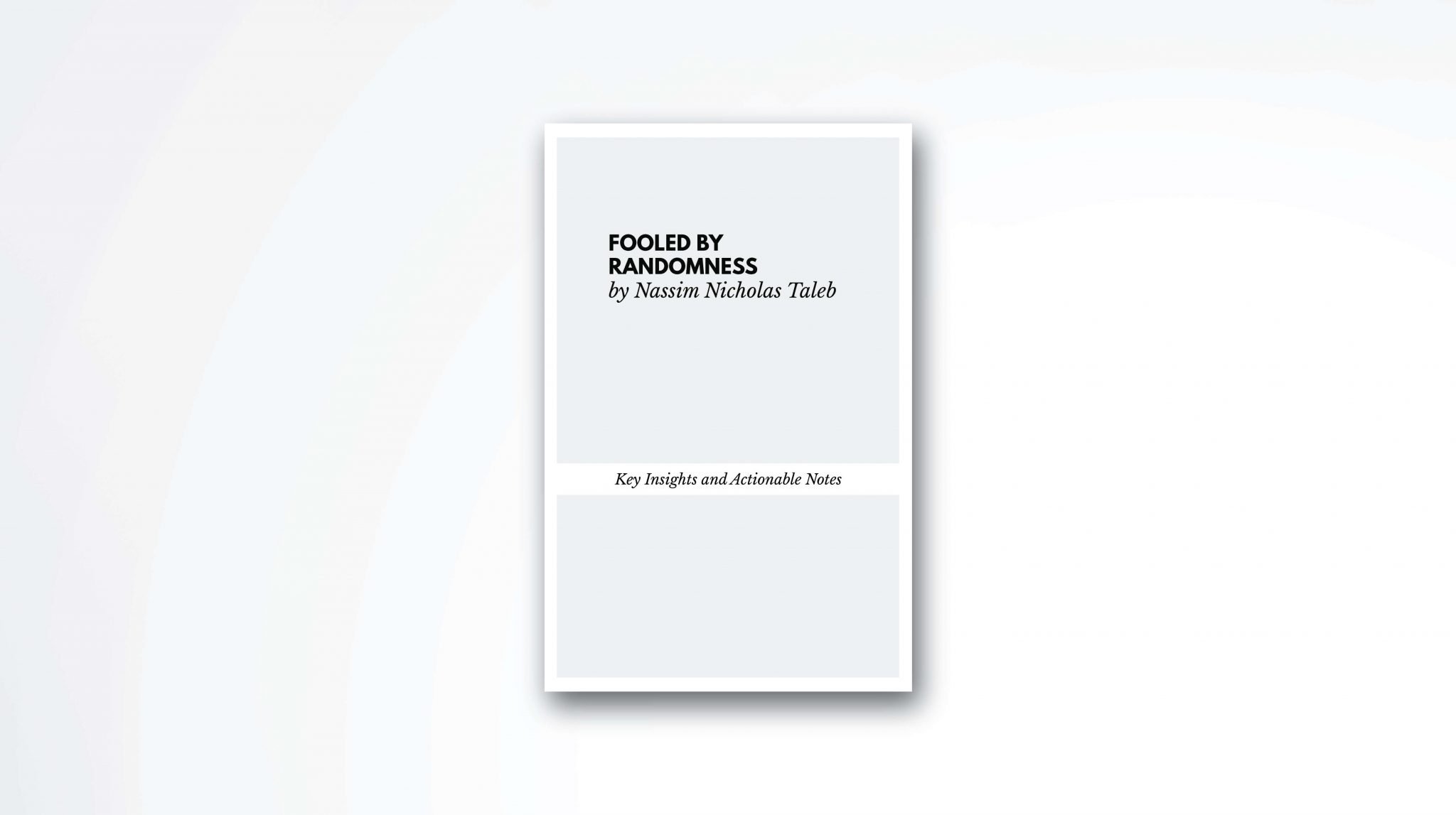 The title Fooled by Randomness refers to our tendency to mistake luck for skills and to our misguided conviction that access to more information means higher success ration. Nassim Nicholas Taleb shatters the theory that hard work, alone, will guarantee you fame and fortune. According to his views in this book, you need a dose of luck in addition to your expertise to gain prosperity.

When we don’t have all the pieces to the puzzle we tend to imagine that the missing ones are going to turn the tides in our favor while in reality, we’re simply fooling ourselves. Or in other words, the author is saying that a lot of things in life happen by chance. The best thing you can do to guarantee a sort of successful future for yourself is to adequately evaluate your skills at any given moment and to continuously upgrade them.

5 Key Lessons from Fooled by Randomness

“Mild success can be explainable by skills and labor. Wild success is attributable to variance.” Nassim Nicholas Taleb

So you think that hustling and grinding will boost your social media following and sky-rocket your ass up the corporate leader?

I can’t blame you. I’m, too, brainwashed by modern media that promotes the hard-working entrepreneurial lifestyle where the only thing you do is work and hope for riches.

According to these views, if you work hard and long enough, your spot amongst the blue badge holders on social media will be guaranteed.

But the probability of the above to happen only through Hercules-like efforts is slim.

Think about it for a moment. There are plenty of hard-working people around you, but are they widely successful in terms of money and fame? Not all of them.

Don’t assume that hard work is the differencing factor between living in a 5 bedroom house and living on the street. It’s necessary, yes, but it’s not the only thing you need.

So what do you do then?

Take advantage of the discrepancies that are happening occasionally. Or, as the author writes, “I try to benefit from rare events, events that do not tend to repeat themselves frequently.”

Therefore, you need to observe trends and try to capitalize on them but at the same time don’t get too hooked. Otherwise, you’ll become one of those lottery ticket junkies.

When we’re about to decide on something important, say purchase a car or a house, we start to surround ourselves with all kinds of data. We burry so deep in information, and we constantly add more, because we think that the next batch of input will tip the scale in favor of what we’ll believe is the “perfect” choice.

In reality, though, this sort of information overload is nothing but noise.

“The more data we have, the more likely we are to drown in it,” says Nassim Nicholas Taleb.

Not only the data we collect cause us to burn out, but we also start to see things as we want them to be. We get biased towards the thing we want (dictated by our emotions) not so by its practicality.

That’s why a lot of folks buy luxury goods that are not as useful as cheaper alternatives – Gucci handbags instead of a piece that costs 50 bucks. They are lead by their emotions as they want other people to see them as worthy, as more authentic.

Put simply, you don’t need all the data in the world to make a decision. You simply need to know which part of yourself you want to satisfy: your emotions or your practical self-image. While the former will want to feel internal content and social acceptance, the latter will lean towards tools that are the best value for their money.

Selling 10 cars to a single client visiting your used car shop can be interpreted as being very good at selling stuff. However, what if the person actually wanted to buy 10 cars? Or, we can go even further and say that he walked in your store hoping to buy 20 cars but by constantly interrupting the person you made him reconsider and that’s why he got only 10.

Well, that’s definitely a different way to look at the situation.

Unfortunately, people rarely think like this. That’s why Nassim Nicholas Taleb writes the following in the book: “Remember that nobody accepts randomness in his own success, only his failure.”

While we think that good things happen only because of our impeccableness, we always blame outside circumstances – other people, random events, our cat – when things are not working out the way we want them to.

Your lifelong task in life is to always tell the difference between the two so you can adjust accordingly.

What do you do, say, before investing in stocks?

If you’re a pro, you’ll probably surround yourself with data that will show you how the stock traded in the past – ups, downs, probably reasons. The more you look, the more you’ll convince yourself that the asset will go up (or down) in the next months. So, you’ll place your bet hoping for high returns.

But you don’t have to be in the stock market business to understand that this type of strategy doesn’t work so great. The success ration of traders is around 25% according to the modern trading platforms.

With the above in mind, I’ll add the observation of John Stuart Mill, a famous British philosopher mentioned in the book about swans: “No amount of observations of white swans can allow the inference that all swans are white, but the observation of a single black swan is sufficient to refute that conclusion.”

What that means is that thinking something is true just because there is not evidence of the opposite doesn’t make it true. It simply makes it true for you, thus the fooled by randomness title.

That’s kind of the hidden message in the book.

So, to avoid being fooled by randomness, as many people in the stock market are, you need to focus most of your time learning the basic principles of the subject you want to master, not so much on what’s trendy right now. Also, to keep an open mind and don’t be afraid (or ashamed) to change your opinion when the situation requires.

Lesson #5: Don’t Fight Your Emotions, Cope With Them

The best part of the book, no doubt, is when the author confesses that even he – the person who spotted our tendency to be influenced by random events – falls victim to his emotions.

The epiphany I had in my career in randomness came when I understood that I was not intelligent enough, nor strong enough, to even try to fight my emotions. Besides, I believe that I need my emotions to formulate my ideas and get the energy to execute them.

I am just intelligent enough to understand that I have a predisposition to be fooled by randomness—and to accept the fact that I am rather emotional.” Nassim Nicholas Taleb

Two important things from the above quote:

In conclusion, I would say that regardless of your expertise and your practical way of thinking in most of the cases, there is a chance that some of your future decisions will be influenced by your emotions. Once you’re aware of this, you can become better at spotting these situations and probably reconsider your next move.

Some people can get offended by this book because of how the author labels virtually everyone who we, the mortals, kind of admire and think of authority figures. He calls financial economist charlatans and says that journalism is just noise and a waste of time.

Personally, I’m happy to read smart people ranting about things and dismissing the accepted by society ideas as long as they’re not taking themselves too seriously. And that’s exactly what Nassim Nicholas Taleb does in this book. Actually, he’s quite sincere about his limitations and his flaws – making the book even more enjoyable.

If you’re considering reading the book, keep in mind the following: If you’re know-it-all smarty-pants you’ll surely hate the author but at least you might reconsider some of your hardcoded beliefs about the world.

Don’t rely on past events and on social norms to make a decision. Always look for new sources of information, preferably different from your current stance. This will give you a fresh perspective and potentially save you from being fooled by randomness.

Probability is not a mere computation of odds on the dice or more complicated variants; it is the acceptance of the lack of certainty in our knowledge and the development of methods for dealing with our ignorance.” Nassim Nicholas Taleb