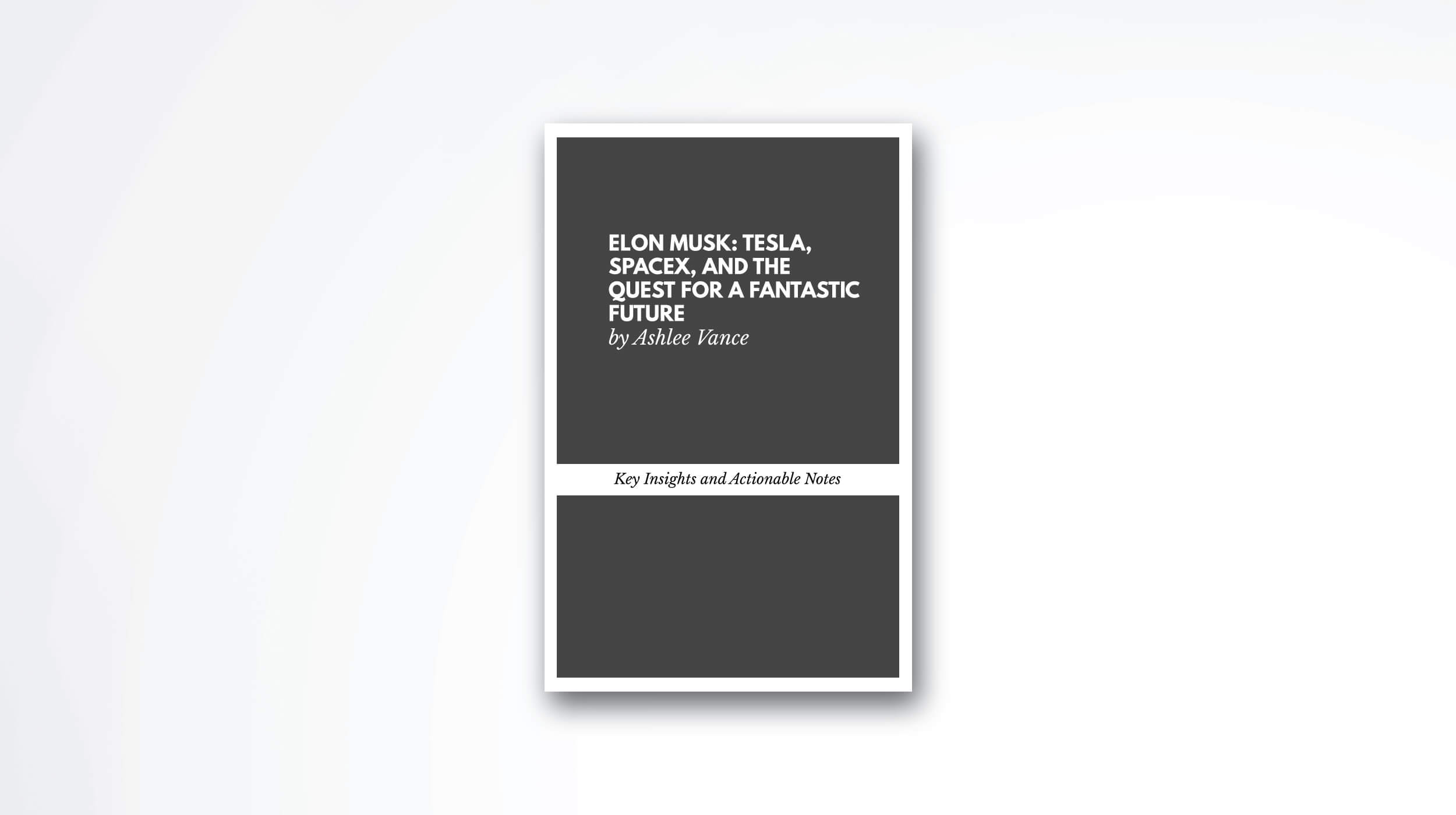 Unique chance to get into the life (and mind) of one of the most interesting guys of the 21st century – Elon Musk. The guy behind PayPal, SpaceX, SolarCity, The Boring Company, and Tesla Motors. How he got started in the business world with companies like PayPal and later SpaceX? What he’s up to now? How does he imagine the future and how dreaming huge (not only big) can make you a modern superstar?

Don’t just aim to make money or chase momentary opportunities, create your own meaningful worldview, your own mission that will be beneficial for society as a whole, not only you. With your actions, try to solve big problems, like Musk. All the companies Elon manages are devoted towards making Earth a better place to live.

5 Key Lessons Elon Musk: Tesla, SpaceX, and the Quest for a Fantastic Future:

Lesson #1: Figure Out What Questions To Ask Yourself

If we ask the right questions, we’ll eventually come up with the right answers. Unfortunately, we rarely talk to ourselves in a sense of figuring out what we really want from life.

Once you figure out the question, then the answer is relatively easy. I came to the conclusion that really we should aspire to increase the scope and scale of human consciousness in order to understand what question to ask.” Elon Musk

Or in other words, finding meaning should be our top priority.

Not only that many of us have no clear idea of what they want to do with their lives, but this lack of purpose is passed onto their children. We should strive to change this. Once we find our higher purpose, we should later try to pass it to our kids and to others around.

Here Elon Musk is not talking about finding a good stable job, no, he means finding something greater than that. Working, pursuing something that will one day help humanity advance. Something lasting, meaningful. Being rich has no real value if you’re later just keeping all of your money for yourself or your job doesn’t help others.

For example, Musk’s determination for clean solar energy is admirable and inspiring. In 2014, he made all Tesla patents and analysts public. With this action, he wanted to help other companies build electric cars more easily, which will inevitably help mankind.

It might sound cliche-ish but giving back and aiming big is what you should do if you really want to make a difference in the world. To do so, ask yourself questions. Hard questions. Like, “What long-term thing I could focus on that will improve other people’s lives?”

Lesson #2: You Create Your Own Opportunities

Musk was/is an opportunist, a visionary from an early age. He started crafting his future very young. After abounding South Africa, and reuniting with his cousins in Canada, one of his daily activities was cold calling people who he was interested in meeting. The people, he and his brother “harassed,” were all people in top-level positions, working in local firms. Or in other words, Elon was determined from a really young age to become successful.

So, don’t be like your lazy uncle who only complains about how the government is corrupt and how his boss underestimates him. Be like Musk, proactive.

You alone, can create the future you desire for both you and the people around you. This means finding and seizing opportunities. Don’t wait for your boss, mom, spouse, or some random internet influencer to tell you what to do. You, alone, should find these things on your own. Complaining won’t get you anywhere. It’s just a verbal expression of your own failures and it doesn’t really help you.

If you really want to make progress and feel good about yourself, try looking at things from a different angle. Don’t say, “I failed because my boss is a prick,” Rather, think in ways that aspire further action, “I didn’t get the promotion. Probably I made a mistake somewhere. I should try harder and focus my efforts in a different direction.”

Lesson #3: Vacations Will Kill You

You don’t need to read the whole book to know that Elon Musk is a hard-working motherf***. Louching X.com, the ancestor of PayPal, took longer than expected. And in December 2000, Elon decided that he needs to spend some time with his wife. They first visited Brazil and after that South Africa. Unfortunately, while in Africa, Musk contracts the most virulent version of malaria. After spending more than 10 days in the local hospital, fighting to save his life, he said, “Vacations will kill you!”

Again, he is insanely right. Taking too much time off, laying around, doing nothing, won’t do you any good. Long vacations are for people with no clear vision, ideas, and goals. People who don’t know what they want to do with their lives. That’s why they waste it traveling and thinking that’s the most important thing in the world. Even though seeing the world and sharing fancy Instagram photos is cool, what happens after that?

The only things you have left are a bunch of filtered photos and leftover memories. Try selling these things so you can save enough money for your retirement.

Elon Musk is well known for his aggressively idealistic delivery dates. However, this over-optimism about when a particular product will launch has earned him the name of a guy who doesn’t deliver. But the world doesn’t mind that much. How could we, we are talking about colonizing Mars?

But what’s the reason behind his delivery issues?

Mainly, his assumption that everybody will work really hard when a certain date is scheduled. However, things usually don’t work like that. People are hard to manage. But he doesn’t quit. One of the things Musk asks his employees to do is to schedule their time at work in really small details. This includes even scheduling when they should visit the bathroom. After all, they are inventing the future. They don’t have time to linger around. Mars is awaiting!

Setting goals and executing at your full potential it’s a must these days. We are surrounded by competitors. The slightest lag in your daily routines and product updates will move your pawn to the bottom of the leaderboard. So, you need to move quickly and learn fast along the way.

Musk’s greatest advantage, in the rocket build industry, is his knowledge about the whole process. He doesn’t only hire the best, most talented people in the world, but he also absorbs what they know. Musk surrounds himself with great minds and instead of making them feel stupid, like most of the executives do, he learns from them.

So, if you really want to get most of your time, your task is twofold:

Lesson #5: Get Used to Pain And Suffering

While reading Elon Musk’s biography, you can’t unsee the years of struggle. All the setbacks, failures, the lack of money. These are only a few of the things Elon Musk and the people involved in the companies he is running had to live with. Making, creating something meaningful, people will want to buy, takes time and involves a lot of pain. That’s why Musk said, “Build quick and learn quickly.”

Even though in the end it was worth it, it wasn’t so obvious in the early years of SpaceX. I took a couple of long years till Falcon 1 made a successful launch into the orbit – and a bunch of millions.

The long hours, the pressure to run a million-dollar company is enormous. Multiply this by three (for Tesla and SolarCity + later The Borning company) and you will probably look for a rope to hang yourself. That’s not the case with Elon, though. He’s ultra-involved in everything he does and he doesn’t take no for an answer. But it’s hard work. And it involves pain and suffering. A lot of them.

Elon Musk: Tesla, SpaceX, and the Quest for a Fantastic Future by Ashlee Vance is a must-read for everyone thinking of starting a new business. It won’t only give you ideas about how to run a business and what to focus, no, it will also inspire you to think and do things that previously sounded impossible.

Although Elon is quite harsh with the people working in his companies, he’s surely someone to admire. What he does in all of his companies will surely change the world for good. Along with his quest to make electric cars affordable for all, he’s also trying to make humans interplanetary creatures. If you’re still not following him online, I’ll suggest to check his Twitter profile and stay up-to-date with everything he does. You’ll surely find his mission inspiring.

Thumbs up for Ashley Vance. He really captured his personality and ambition.

My personal takeaway is this: If you believe in something, do everything you can to make it possible.

Good ideas are always crazy until they’re not.” Elon Musk

What Musk has developed that so many of the entrepreneurs in Silicon Valley lack is a meaningful worldview. He’s the possessed genius on the grandest quest anyone has ever concocted. He’s less a CEO chasing riches than a general marshaling troops to secure victory. Where Mark Zuckerberg wants to help you share baby photos, Musk wants to . . . well . . . save the human race from self-imposed or accidental annihilation.” Ashlee Vance

If the rules are such that you can’t make progress, then you have to fight the rules.” Ashlee Vance

Sign up for my newsletter and download the Reader's Kit. A set of printables that will help you keep track of the books you read and more.