This is a comprehensive summary of the book Built to Last: Successful Habits of Visionary Companies by James Collins and Jerry Porras (part of the business book summaries collection). Covering the key ideas and proposing practical ways for achieving what’s mentioned in the text. Written by book fanatic and online librarian Ivaylo Durmonski. Supporting Members get access to downloadable worksheets.

Not a business book, but a book about building long-lasting human-centric institutions with soul and purpose. Built to Last provides an in-depth overview of the best practices used by exceptional companies, most of them established more than 100 years ago – some of these are P&G, Sony, and Disney. The award-winning authors discuss the core values of these organizations and how they’ve managed to survive and thrive for so long.

In essence, authors Collins and Porras explain why everyone should run a visionary company – with values and desire to make a difference in the world. After observing the top companies in the world these business veterans found out that all of them have something in common. These giants perfectly understand the difference between what should never change and what should be open for a change – the core values don’t change, but their practices might. Or in other words, you can adjust your business depending on the changes happening in the world but never change your values and the reason you exist. Otherwise, people will stop believing in you.

5 Key Lessons from Built to Last:

Say that you’re a great carpenter. You somehow learned to transform a block of wood into a beautiful sculpture. And while there’s nothing wrong with that, your efforts can be defined as “time telling.” You can create a masterpiece, yes, but after you’re gone your skills will perish with you.

Instead of simply telling the time, you can create a system – built a clock – that can tell the time forever. A simple example, in this case, will be to create a course and teach others your practices, values, and principles.

That’s how premium institutions – the ones that are older than our grannies – endure. They build clocks, systems, they create an ideology, a premium standard that serves as a guiding force to the folks who’ll inherit the organization. That’s the most important thing for visionary companies. It is not their product, it’s the organization itself. What they stand for and why they exist.

But that’s rarely how folks these days approach things. They invest all of their capital to ship a single product. They neglect the desires of their employees and are careless about the working conditions. They focus on money and telling time once.

But in the current world, where everything changes super fast, what you’ve created will most probably become obsolete after a year or two. Meaning? You need to spend more time building a clock that will last, not simply telling the time once. You need to create a strong organization with meaningful values and systems in place. Otherwise, you will surely disappear.

“…consider this crucial shift in thinking—the shift to seeing the company itself as the ultimate creation. If you’re involved in building and managing a company, this shift has significant implications for how you spend your time. It means spending less of your time thinking about specific product lines and market strategies, and spending more of your time thinking about organization design.” James Collins and Jerry Porras

Lesson #2: Everything Should Change Despite the Core Ideology

Everything in your organization will someday change: the products, the tactics, the strategy, employees, policies, systems, salaries, offices, even the CEO. However, if you’re interested in building a legendary firm that will stand the test of time you should never change your beliefs and your core values.

Here are examples of the core ideologies of big companies mentioned in the book:

Consider your values as the main driving force of your business – the heart of your business. You cannot function without a heart. So once you have a set of values, make sure everyone in the organization is aware and follows them.

And how do you set your own core values?

It should be part inspirational part functional. It should encourage people to strive for better and also stimulate them to make progress.

As an example, we can take a look at Sony’s ideology: “Our plan is to lead the market with new products, rather than ask them what kind of products they want… Instead of doing a lot of market research, we…refine a product…and try to create a market for it by educating and communicating with the public.”

Whilst innovating is the practical part, the desire to be the best is the part that serves as inspiration. And this type of thinking will never be obsolete.

“Visionary companies are so clear about what they stand for and what they’re trying to achieve that they simply don’t have room for those unwilling or unable to fit their exacting standards.” James Collins and Jerry Porras

How Christianity, Buddhism, and Islam managed to survive for so long? How they’re still worshiped by millions of people?

By offering something no one can: salvation and afterlife.

Whether you admit it or not, the most popular religions are like lightweight cults – or heavyweight depending on where you’re living.

And that’s exactly what you need to do if you want to create a legendary organization – without the part where you convince others that suffering is a gateway to resurrection – create your own cult.

Today’s biggest companies don’t just sell products, they build a cult following for their brand. And they do it not just by selling their vision and products to their customers, they also brainwash (in a good way) their employees.

Thomas J. Watson said it best a long time ago: “If we believe that we’re working for just another company, then we’re going to be like another company. We have got to have a concept that IBM is special. Once you get that concept, it’s very easy to give the amount of drive to work toward making it continue to be true.”

You need to instill a feeling of greatness in your employees. They need to start believing that what they’re doing is helping humanity. By doing so, they’ll put all of their heart and soul into the process. This dedication will undoubtfully help you acquire more customers and also allow you to form lasting relationships with both your workers and your customers.

And how do you create your own cult?

“Nike has a powerful core purpose that permeates the entire organization with a cult-like fervor: To experience the emotion of competition, winning, and crushing competitors. Nike has a campus that seems more like a shrine to the competitive spirit than a corporate office complex; giant photos of Nike heroes cover the walls, bronze plaques of Nike athletes hang along the Nike “Walk of Fame.” Nike people who do not feel stimulated by the competitive spirit and the urge to “be ferocious” simply don’t last long in the culture.” James Collins and Jerry Porras

“If you really listen to your customers, they’re never happy—they’ll let you know what you’re doing wrong—and it just forces you to get better. Fat headedness is what bothers me most. I think we get so much press about our service and all this stuff and we start believing it and then we think we’re better than the customer. And then we’re dead right there.” Bruce Nordstrom

There’s a reason perfectionists struggle to ship products – there’s always something that can be improved. But paradoxically, if you never publish anything, you’ll never be in business.

So, if you want to be successful, and more importantly, to stay successful, you need to accept the fact that you can always do better. This includes both creating and shipping something even if it has some flaws and also the ability to accept feedback from clients when you think your product is impeccable.

The last is a hard pill to swallow for a lot of people.

A lot of owners create products and think it’s the ultimate creation. “If someone doesn’t like it, he’s stupid,” they say. But that, of course, is the wrong way to look at things.

Creating a visionary company is all about continuous improvement. As the authors say, “Good old fashioned hard work, dedication to improvement, and continually building for the future will take you a long way.”

Yes, unfortunately, there’s no magic pill. No bizarre-sounding tactic that can help you crush your competition with one blow.

Not satisfactory, I know.

After all, working hard every day, even during difficult times is not for everyone. But that’s what you have to do. When you understand that there’s no such thing as comfort, and things will never be easy, nor perfect, you’ll have your formula, your magic pill that can propel you and inspire you to keep going.

Lesson #5: Use The Vision Framework To Start Your Own Empire

Most startups don’t think beyond the 5-year mark. Their main desire is to indulge investors and to make a profit. After that, sell the company and start something new.

Starting and selling might be a good idea for some. But true joy comes from creating something that can outlive you – something with higher meaning.

To help us in our mission, Collins and Porras share a framework, called the Vision Framework, that can be used as a foundation for creating an enduring company.

The main two components of this empire-building tool are core ideology and an envisioned future.

Let me give you the basics:

Before getting my hands on this book, I thought, ” Gosh, finally a book that will help me transform my business into a kick-ass company. After I’m done, I’ll have the magic formula to succeed and crush the competition.”

It turns out, that there is no magic pill. No secret formula. No shortcut. No amazing product that will help you become the next 3M or HP. To succeed, to create a company with traditions, values, loyal employees, have a mob of fans that are always talking about you, and also make a good profit, it turns out, requires only one thing: good old-fashioned hard work.

Built to Last presents behind the scenes look of some of the oldest organizations that are still crushing today – how they managed to survive for so long and how they’re different from their competition. Some of the companies mentioned in the book are General Electric, 3M, Merck, Wal-Mart, Hewlett-Packard, Walt Disney, and Philip Morris.

If you’re running a business, or you’re working in a leading position for a large organization, you should stop reading this and go get your hands on the copy.

My personal takeaway is this:

Think of your business as a small town – with laws, ambitions, and long-term goals, and you as the current mayor. Your job is to make sure everyone’s happy and that your city is thriving. But while you supervise the day-to-day tasks, you also need to make sure that everyone is working together to reach the long-term vision. Vision, you’ll most probably never see because you’ll be long gone.

“PROFITABILITY is a necessary condition for existence and a means to more important ends, but it is not the end in itself for many of the visionary companies. Profit is like oxygen, food, water, and blood for the body; they are not the point of life, but without them, there is no life.” James Collins and Jerry Porras

“Irrational? Perhaps. Rare? Yes. Difficult? Absolutely. But as F. Scott Fitzgerald pointed out, “The test of a first-rate intelligence is the ability to hold two opposed ideas in the mind at the same time, and still retain the ability to function.” This is exactly what the visionary companies are able to do.” James Collins and Jerry Porras 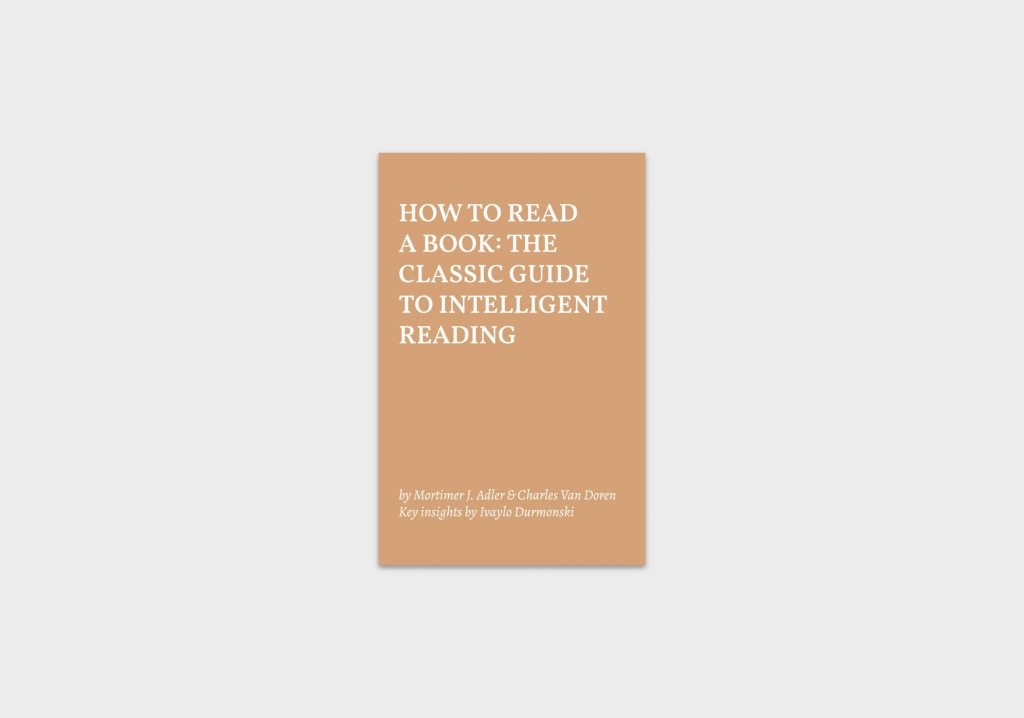